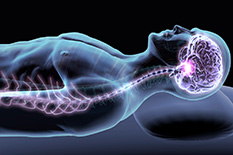 The National Institutes of Health (NIH) has awarded $2.8 million to a University of Maryland research team investigating potential links between spinal cord injury and dementia, along with new avenues for treatments.

Recent evidence indicates that patients with a spinal cord injury and no concurrent brain injury are at a high risk of dementia, resulting in substantial cognitive decline and memory impairment.

“Yet, little is known about the mechanisms of spinal cord injury-induced dementia or its relationship to the age of onset or age-related neurodegenerative disorders, such as Alzheimer’s disease,” said Junfang Wu, associate professor with the University of Maryland School of Medicine’s Department of Anesthesiology and the project lead. She’s conducting the research in partnership with Steven Jay, an associate professor in UMD’s Fischell Department of Bioengineering.

While researchers have much to learn about the factors that connect spinal cord injuries to dementia, many believe this linkage results from neuroinflammation in the brain.

Wu, Jay and fellow researchers are working to understand whether neuroinflammation may be induced by circulating extracellular microRNAs (exRNAs) in the blood. These microRNA molecules exist outside the cells in which their genetic materials are transcribed, and are typically associated with a carrier molecule or vesicle that prevents their degradation. Although the purpose of exRNAs remains uncertain, research suggests they play a role in intracellular communication and regulation, among other things.

In particular, the team is focusing on exRNAs carried through blood by extracellular vesicles (EVs)—ubiquitous, cell-derived nanoparticles that naturally transfer biomolecules between cells. The researchers hope that by better understanding how EV-associated exRNAs induce inflammation, they can ultimately design a therapeutic approach to prevent or counteract the effects.

“The potential to discover and leverage new biological knowledge to rationally design a novel approach to central nervous system therapy is exciting and could have implications beyond dementia and spinal cord therapy,” Jay said.

In addition to Wu and Jay, Associate Professor Bogdan Stoica and Professor Alan Faden, physicians at the University of Maryland School of Medicine, are co-investigators on the grant. In 2017, Wu and Jay were awarded a University of Maryland Brain, Health and Human Performance grant to launch their collaborative spinal cord injury research. The $100,000 investment enabled the research duo to generate the preliminary data they needed to pursue NIH funding.