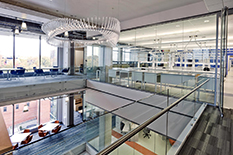 "The Fischell Institute will take cutting-edge research and create new products with the expectation that new businesses will be created potentially from this research and development,” Maryland Deputy Secretary of Commerce Benjamin Wu said at the Jan. 3 event, noting that Genetic Engineering & Biotechnology News recently named the D.C.-Maryland-Virginia region among the top five biopharma clusters in the nation. “These new businesses will create new jobs that will sustain our state’s economy and continue to make us one of the leaders in the nation, and certainly in the region, for job growth."

In 2005, scientist and engineer Robert E. Fischell M.S. ’54, Sc.D. (honorary) ’96 and his family made a $31 million gift to the University of Maryland to establish both the Fischell Department of Bioengineering and later, the Robert E. Fischell Institute for Biomedical Devices. Fischell is known for inventing lifesaving medical devices and pioneering the modern era of space satellites. He holds more than 200 patents and was a leading contributor to many crucial inventions, including coronary stents, the implantable heart defibrillator, the implantable insulin pump and a device to prevent migraine headaches.

More than 100 faculty members, researchers and industry representatives gathered for the celebration at A. James Clark Hall, home of the Fischell Institute’s main office and labs. The afternoon event kicked off with a medical device symposium that highlighted several research initiatives supported in part by the Fischell Institute.

"Since the establishment of the Fischell Department of Bioengineering and the Robert E. Fischell Institute for Biomedical Devices, we’ve seen the convergence of health information technology, consumer electronics and manufacturing industries. This has been reflected in similar changes in the medical device realm," said Mary Ann Rankin, senior vice president and provost at the University of Maryland, College Park. "This evolution spells new opportunities for human health advancements, but it also presents unique challenges for innovators who have to navigate the changes in technology and the changing regulatory landscape associated with them in order to deliver medical devices to patients who need them."

Throughout the day, faculty from the two campuses highlighted projects ranging from cutting-edge diagnostics tools to the use of drones for emergency delivery of organs to patients awaiting transplants.

"It is clear that the Robert E. Fischell Institute for Biomedical Devices serves as a conduit for innovation and a melting pot of many disciplines and fields," said Fischell Institute Director William E. Bentley. "We bring together not only thought leaders in medical science and technology, but also in the practice of health care, and we are all inspired by Dr. Fischell’s call to improve quality of life for others."

The institute's namesake said the sort of work being done there is crucial for the health of people everywhere.

"So much of the good in the world today—all the conveniences we have, the advancements in health from which we benefit—are in large part the result of contributions made by scientists and engineers," Fischell said. "And that is why the Robert E. Fischell Institute for Biomedical Devices is so important."

The Fischell Institute receives funding support through the University of Maryland’s Mpowering the State strategic partnership, which leverages the strengths and complementary missions of the Baltimore and College Park campuses to grow Maryland’s innovation economy, advance interdisciplinary research, create opportunities for students, and solve important problems for the people of Maryland and the nation.