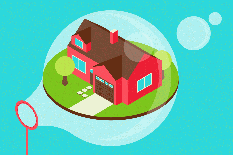 Narratives are key to the formation of bubbles, say Brent Goldfarb (below) and David Kirsch (at bottom), associate professors of management and entrepreneurship.
(Illustration by Jason Keisling)

Before the 2007 housing crisis set off the largest U.S. economic downturn since the Great Depression, optimism abounded about home ownership as a great investment. A few years earlier, everyone was buying into the “get big fast” idea of online retail—before the dot-com bubble infamously burst.

Amid the endless percentages and stats of the stock market, narratives like those are key to the formation of bubbles, assert Brent Goldfarb and David Kirsch, associate professors of management and entrepreneurship. In their new book released today, “Bubbles and Crashes: The Boom and Bust of Technological Innovation,” they analyze historic examples of rises and falls in the economy to help pinpoint when you might be observing a bubble about to pop—or when you might not.

They spoke with Maryland Today about what causes bubbles—“episodes in which investors drive up prices and get fooled”—how they compare to times of stability and what we can learn from them:

Besides the housing bubble, you cite the dot-com boom and bust, the Great Railway Mania of the 1800s, the Roaring Twenties-Great Depression and the 1960s electronics boom. What did they have in common?
Goldfarb: There are four causes in our model, and each of these fits in pretty well: There was some sort of narrative of inevitability. There was a high degree of uncertainty. There were a lot of novices, new people who were investing. And finally, there has to be a direct way to invest in each of these. So, for example, except for Tesla today, it’s really hard to invest in the electric car industry because every other electric car company is part of a large conglomerate that produces a host of products. So if you invest in Ford, you’re not just investing in an electric car.

Kirsch: Those particular episodes were so important that they came to define a kind of economic regime or a period of time. It’s how we think about that society. We think of the railway boom as kind of a defining feature of British society at that time, or we think of the dot-com era, not just the dot-com boom and bust.

When do bubbles burst?
Goldfarb: At some point, there’s a resolution of uncertainty that would make the narrative untenable. So in the dot-com example, there was this idea that you would make all this money in internet retail. It turns out that actually doing that is hard because the logistics of sending products around are complicated. It becomes clear with the results of that ’99 Christmas season that for some firms, it doesn’t make sense to sell via the Internet at that point in time. And that led to a crash.

You mentioned Tesla, but are any other bubbles forming today?
Goldfarb: Certainly in machine learning. A specific application of machine learning is autonomous vehicles—self-driving cars. For several years, the proponents spoke about an inevitability: “Pretty soon, we’re all going to be in these self-driving cars because it’s just going to be so much safer.” And then you saw a huge amount of investment. But the most recent thing is the CEO of Waymo saying, “I don’t think we’ll ever have self-driving cars that work in all situations,” because they were having a really hard time trying to get them to work in bad weather. I also think that Tesla and probably other transportation companies like Uber and maybe Lyft are overvalued. The latter two are not public firms, so it is a little hard to know. Bitcoin’s a little different—Bitcoin is another burst bubble. That was something we could all invest in, even though it was a little cumbersome.

What lessons can we draw from past bubbles—or non-bubbles?
Kirsch: If we take our own advice, the metacognitive takeaway from this book would be, “Don’t believe this book.” Be very skeptical of everything. You hear investors talk about “Invest in what you know,” or “Invest in what you see, or companies that you understand.” And it may be that in fact, the things you know and see and buy and understand are actually just the things you think you understand, and that you might actually be caught up in a particularly narrow information diet.

How are you applying this info at UMD?
Kirsch: I think we teach a lot about modesty. It’s amazing how many students think Tesla is just an amazing success story. Then you start asking a few questions. And pretty soon, all of a sudden you realize, “Oh, my goodness, there’s a lot of unfounded acceptance and overoptimism and unquestioned beliefs.” And so hopefully just the act of helping people realize the extent to which they may be wrapped up in their own biases and caught up in a bubble can be very helpful both in the near term, but also for when they go out and face the bubble that we haven’t yet seen.