For Batteries, One Material Does It All

For Batteries, One Material Does It All 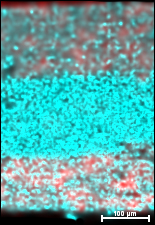 UMD Engineers made a battery of all one material simply by sprinkling carbon (red) into each side of a new material (blue) that forms the electrolyte and both electrodes at the ends of the battery. Credit: Maryland NanoCenter

COLLEGE PARK  -- Engineers at the University of Maryland have created a battery that is made entirely out of one material, which can both move electricity and store it.

"To my knowledge, there has never been any similar work reported," said Dr. Kang Xu of the Army Research Laboratory, a researcher only peripherally related to the study. "It could lead to revolutionary progress in area of solid state batteries."

Envision an Oreo cookie. Most batteries have at either end a layer of material for the electrodes like the chocolate cookies to help move ions though the creamy frosting – the electrolyte. Chunsheng Wang, a professor in the University of Maryland’s Department of Chemical and Biomolecular Engineering, and his team have made a single material that incorporates the properties of both the electrodes and electrolyte – the crunchy cookie and the smooth center.

"Our battery is 600 microns thick, about the size of a dime, whereas conventional solid state batteries are thin films -- forty times thinner. This means that more energy can be stored in our battery," said Fudong Han, the first author of the paper and a graduate student in Wang’s group.

The new material consists of a mix of sulfur, germanium, phosphorus and lithium. This compound is used as the ion-moving electrolyte. At each end, the scientists added carbon to this electrolyte to form electrodes that push the ions back and forth through the electrolyte as the battery charges and discharges. Like a little bit more sugar added at each end of a cookie-cream mixture, the carbon merely helps draw the electricity from side to side through the material.

Though the battery is extremely easy to make – a powder compressed in a plastic and steel cylinder – it is still at the proof-of-concept stage, Han said. "We are still testing how many times it can change and discharge electricity to see if it is a real candidate for manufacturing."

The reason the new battery is revolutionary is because it solves the problem of what happens at the interface between the electrolyte and the electrode. A prolonged interaction between the two can result in a wall of useless material that keeps the batteries from working well. The wall increases the resistance at this solid-electrolyte interface.  This in turn increases the heat in the battery, rendering the battery even less useful.

Because Han and Wang's battery is all one material, energy can flow through without a lot of resistance.  This means that the battery easily charges up and discharges smoothly.

Sulfide-based compounds are not particularly environmentally friendly materials, Han said. "So next we will try to use oxides, which do not degrade into a poisonous gas, instead." The battery’s solid powder is, however, safer than the current liquid-based batteries.

The research was done as part of the Nanostructures for Electrical Energy Storage (NEES) project from the Department of Energy, and is also funded by the National Science Foundation.

The work will be published on April 29, 2015 in the journal Advanced Materials.

A Battery Made from a Single Material

To my knowledge, there has never been any similar work reported. It could lead to revolutionary progress in area of solid state batteries."