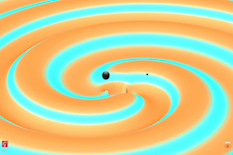 Gravitational waves—ripples in the fabric of space-time—have been observed for the second time, by an international team of scientists that includes UMD physicists. Like the historic first detection announced this past February, these gravitational waves were also generated by the merger of two black holes.

The ability to detect these waves, created by violent cosmic collisions, excites scientists because it provides a new way to observe the universe, to “hear” a previously undetectable soundtrack of the cosmos.

Both of the twin Laser Interferometer Gravitational-Wave Observatory (LIGO) detectors—located in Livingston, Louisiana, and Hanford, Washington—detected this gravitational wave event, named GW151226. The LIGO Scientific Collaboration (LSC) and the Virgo Collaboration used data from the twin LIGO detectors to make the discovery, which is accepted for publication in the journal Physical Review Letters.

Gravitational waves carry information about their origins and about the nature of gravity that cannot otherwise be obtained. Physicists on the LIGO and Virgo teams concluded that the final moments of a black hole merger produced the gravitational waves observed on December 26, 2015.

“It's fabulous that our waveform models have pulled out from the noise such a weak but incredibly valuable gravitational wave signal,” said Alessandra Buonanno, a UMD College Park Professor of Physics and LSC principal investigator who also has an appointment as Director at the Max Planck Institute for Gravitational Physics in Potsdam, Germany. Buonanno has led the effort to develop highly accurate models of gravitational waves that black holes would generate in the final process of orbiting and colliding with each other.

“GW151226 perfectly matches our theoretical predictions for how two black holes move around each other for several tens of orbits and ultimately merge,” Buonanno added. “Remarkably, we could also infer that at least one of the two black holes in the binary was spinning.”

The merger occurred approximately 1.4 billion years ago. The detected signal comes from the last 27 orbits of the black holes before their merger. Based on the arrival time of the signals—the Livingston detector measured the waves 1.1 milliseconds before the Hanford detector—researchers can roughly determine the position of the source in the sky.

“It is very significant that these black holes were much less massive than those observed in the first detection,” said Gabriela Gonzalez, LSC spokesperson and professor of physics and astronomy at Louisiana State University. “Because of their lighter masses compared to the first detection, they spent more time—about one second—in the sensitive band of the detectors. It is a promising start to mapping the populations of black holes in our universe.”

“We could tell within minutes that GW151226 was very likely a real event. We all just marveled at it for a while,” said Peter Shawhan, an associate professor of physics at UMD and an LSC principal investigator. “By December we were sure that the first event was genuine and we had a fairly mature draft of that paper, which finally came out in February. But it was very satisfying to know, even then, that we already had a second event on our hands.”

The second discovery “has truly put the ‘O’ for Observatory in LIGO,” said Albert Lazzarini, deputy director of the LIGO Laboratory at Caltech. “With detections of two strong events in the four months of our first observing run, we can begin to make predictions about how often we might be hearing gravitational waves in the future. LIGO is bringing us a new way to observe some of the darkest yet most energetic events in our universe.”

Both discoveries resulted from the enhanced capabilities of Advanced LIGO, a major upgrade that increased the sensitivity of the instruments and the volume of the universe probed compared with the first-generation LIGO detectors.

Advanced LIGO’s next data-taking run will begin this fall. By then, scientists expect further improvements in detector sensitivity could allow LIGO to reach as much as 1.5 to two times more of the volume of the universe compared with the first run, which has already resulted in two major findings.

The Virgo detector, a third interferometer located near Pisa, Italy, with a design similar to the twin LIGO detectors, is expected to come online during the latter half of LIGO’s upcoming observation run. Virgo will improve physicists’ ability to locate the source of each new event, by comparing millisecond-scale differences in the arrival time of incoming gravitational wave signals.

The research paper, “GW151226: Observation of Gravitational Waves from a 22 Solar-mass Binary Black Hole Coalescence,” by the LIGO Scientific Collaboration and the Virgo Collaboration, has been accepted for publication in the journal Physical Review Letters.