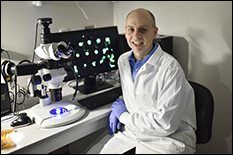 Minta Martin Professor of Engineering Christopher Jewell (Fischell Department of Bioengineering [BIOE], Robert E. Fischell Institute for Biomedical Devices) was selected for the National Institutes of Health (NIH) Concept to Clinic grant to support research for a promising therapy to treat multiple sclerosis (MS). The NIH Concept to Clinic: Commercializing Innovation (C3i) program is an in-depth, entrepreneurial training experience designed to provide biomedical innovators with the specialized business frameworks and essential tools for successful translation of biomedical technologies from the lab to the market.

Nearly 1 million people in the United States suffer from MS, an autoimmune disease in which the body’s immune system incorrectly recognizes components of the central nervous system. This causes inflammation and destruction of myelin, the fatty substance that surrounds and protects nerve fibers. When this happens, nerve fibers and cells are damaged, leading to a loss of motor function and other complications.

To lessen the immune system’s attack against the body’s own cells, conventional therapies rely on general immune suppression – a strategy that has proven effective, but can leave patients susceptible to disease or infections. Unfortunately, these therapies are non-curative and require lifelong treatments to slow the disease.

“MS is an awful disease,” Jewell said. “Despite the number of therapies available, the slow progression and lack of options for later-stage disease make it one of the most expensive disease conditions in both quality of life and economic burden. The average lifetime cost of MS care for one patient is over $4 million.”

Recognizing this, Jewell and members of his Immune Engineering Lab are exploring new pathways toward MS treatments that would leave the patient’s immune system intact.

One such idea involves the delivery of immune cues to prompt a special kind of immune cell – regulatory T cells –  to selectively control myelin-reactive cells and thereby ameliorate the disease without inhibiting the body’s healthy immune cells.

"Immune cells adopt either inflammatory or regulatory functions, depending on the signals encountered in the lymph nodes – the tissue that orchestrates immunity,” said Jewell. “But, existing therapies are administered systemically by injection or intravenous infusions. Because these signals must then drain to or be carried to the lymph nodes, it is challenging to control the combinations and doses of signals that actually reach the lymph nodes. This makes it difficult to promote a specific type of T cell function – such as tolerance instead of inflammation."

Funded by NIH’s National Institute of Biomedical Imaging and Bioengineering, Jewel and his team are working towards next-generation therapies for MS using a platform that combines direct lymph node injection with controlled-release biomaterial depots to understand immune tolerance is generated.Jewell and his team have generated promising results, showing that a single treatment in pre-clinical models of MS permanently stops and reverses paralysis.

They hope their approach could be used to improve the effectiveness of MS treatments, and potentially with infrequent administration. Since the group’s technique requires only a small amount of therapeutic cargo to be delivered directly to the lymph nodes, it does not rely on conventional non-targeted or systemic delivery methods that cause side effects that impact the patient’s quality of life. This is particularly important since compliance is a real challenge for MS patients, where they must maintain adherence to their treatment plans over decades as the disease runs the course.

Even more, most existing therapies for MS are indicated for patients with early-stage MS. Jewell and his group are working to test if their interdisciplinary platform offers modularity to control different stages of disease, including the later phase. In the group’s preclinical studies, intra-lymph node treatment was effective in permanently reversing paralysis in multiple models that reflected both early and late stages of the disease.

Through the NIH C3i program, Jewell’s team is receiving training and resources needed to move through the regulatory process, including clinician interaction, customer discovery, good manufacturing processes, and trial design. Beyond MS, the lab is hopeful working to extend this approach to others autoimmune diseases such as type 1 diabetes.