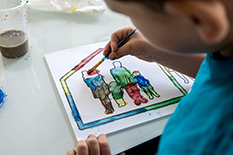 Lesbian, gay, and bisexual youth are nearly 2.5 times more likely to end up in foster care—and stay there—than their heterosexual peers, according to new University of Maryland research.

The study, led by Jessica Fish, assistant professor of family science in the School of Public Health, is the first to document this trend using national data and is published in the journal Child Abuse & Neglect.

Fish and colleagues from the University of Texas at Austin, University of Groningen (Netherlands) and University of Iowa analyzed data from multiple longitudinal health surveys on child health conducted via the U.S. Department of Health and Human Services, including one that is specific to children and families already involved with Child Protective Services.

They found that 4.31 percent of sexual minority youth reported foster care involvement, compared to 1.86 percent of heterosexual youth. This discrepancy is likely related to people coming out at increasingly young ages, resulting in more young people experiencing rejection and displacement while still dependent on their families for care.

The findings also suggest that sexual minority youth may be more likely to remain in the child welfare system than their heterosexual counterparts, perhaps because once removed from their unsafe homes, they are less likely to be reunified with their families or be adopted.

Furthermore, the alternative homes that sexual minority youth are placed in by the child welfare system may be ill-prepared to support them.

“Sexual minority youth unfortunately experience discrimination from foster care parents, siblings and staff,” said Fish. “A system that is designed to protect children may actually continue to harm them.”

Reunification, a common goal for children removed from their families by state child protective agencies, may be especially difficulty or unsafe for sexual minority youth, the researchers said. They underlined the critical need for education and training for child welfare professionals and families alike, and called for more focused research on sexual minority youth in the child welfare system.

The study’s findings are significant, especially given recent efforts to limit LGBTQ couples and individuals from adopting or foster-parenting.  For example, the U.S. Department of Health and Human Services recently granted a federally funded foster care agency in South Carolina a waiver to refuse to place children with same-sex or non-Christian couples.

“The South Carolina waiver, although it pertains to foster parents, leads us to believe that LGBTQ youth are not receiving equitable treatment within the foster care system,” Fish said. “This sets a dangerous precedent. We need more training and education to better meet the needs of LGBTQ youth in foster care. These types of decisions are moving us in the wrong direction.”