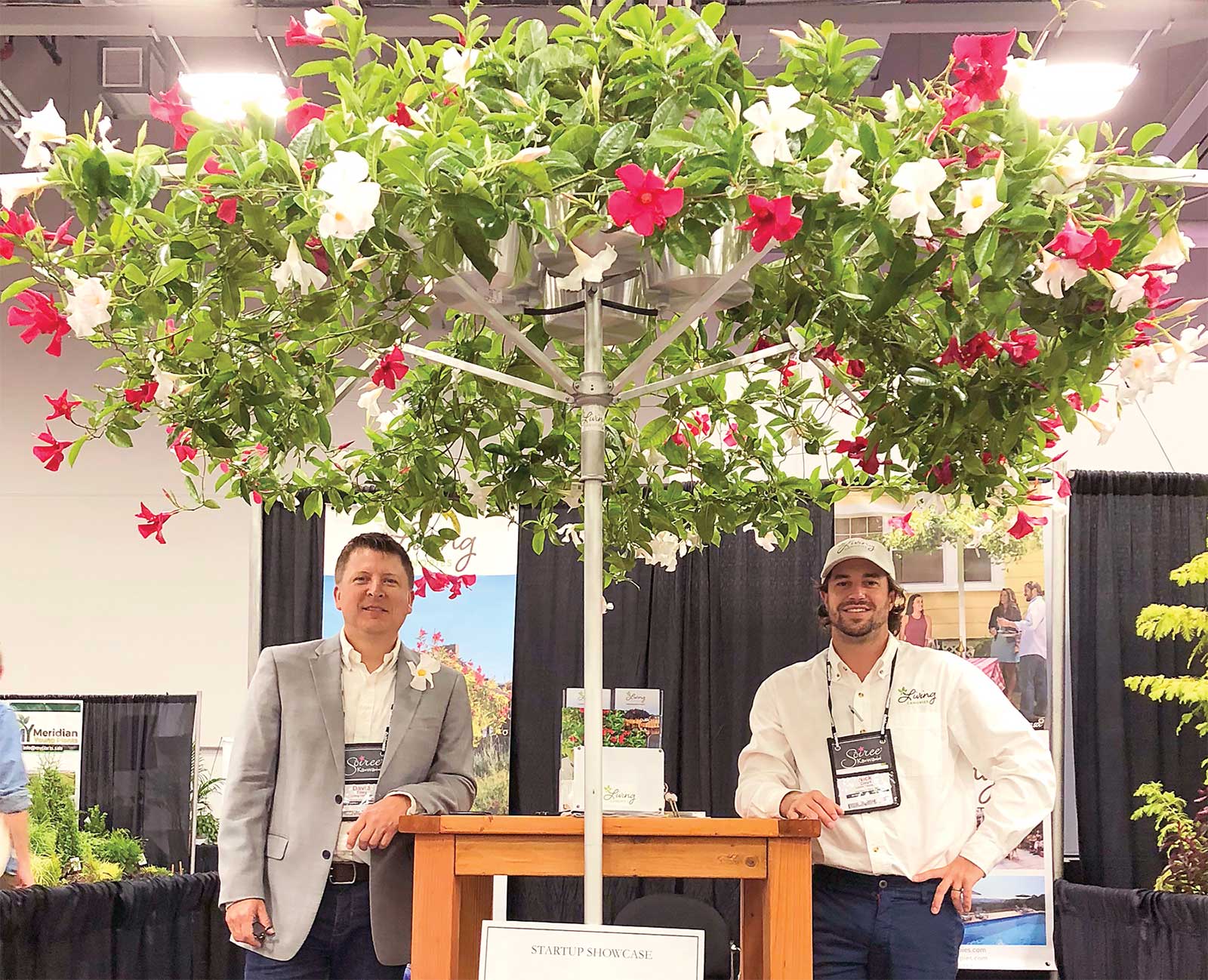 A University of Maryland faculty researcher and entrepreneur with the College of Agriculture & Natural Resources has given the standard patio umbrella an eco-friendly update and designed a living canopy that provides greater shade and natural cooling with the aesthetics of flowering vines for residential patios and porches, outdoor dining, and urban spaces alike — and they are now available for purchase at select Sam’s Club stores.

Living Umbrellas®, which produce natural blooms and shade from spring through fall, come with a smart, solar-powered irrigation system that knows when to water the plants. “All a user has to do is fill the water tank once a week, and it’s good to go,” explained Prof. Dave Tilley, the Living Umbrellas® inventor and founder, who is a faculty member in UMD’s Department of Environmental Science & Technology (ENST).

The canopies also cool you more effectively than a traditional fabric umbrella because of plant evapotranspiration, a natural process where plants and the soils around them release water, which lowers the surrounding temperature.

“When the plants use water, you have a phase change,” said Tilley. “This cools the micro-climate. You will feel 8° F cooler sitting under a Living Umbrella® versus a plastic umbrella. Plus, you are helping the environment, because it doesn’t use as much plastic as a regular umbrella.”

A U.S. patent was recently approved for the invention, and the Living Umbrellas® are gaining a growing customer base from home owners and businesses who love gardens and care about the environment. The umbrellas help reduce carbon emissions and lessen the impact of stormwater run-off, which is particularly valuable in urban areas. Now available at select stores in the Washington, D.C. region, the umbrellas are growing in popularity as a natural and sustainable way to beat the heat.

Inspiration for the Umbrella

In the summer of 2015, Dave Tilley, an associate professor in Environmental Science & Technology at the University of Maryland, was on vacation with his family in Las Vegas when he saw something that served as the inspiration for his invention.

“We were sitting on a pool deck and it was 115 degrees,” said Tilley. “It was like an oven. I looked around the pool deck and noticed there were no umbrellas. Then I looked off in the corner and saw a shrub with people huddled in its shade.”

Suddenly, an idea was born: combine plants and patio umbrellas to provide greater shade, cooling, and beautify spaces with the aesthetics of flowering vines.

This idea gave rise to a complete reimagination of the old fashioned patio umbrella as The Living Umbrella®, an idea that would become the basis for his successful venture, branded Living Canopies, Ltd.

Engineering and Designing the Living Canopy

Tilley and former student and co-founder Nick Cloyd (ENST BS ‘11, MS ’17) got to work on the design and engineering for the canopies. A particularly innovative element of their design for the Living Umbrellas® is the shade component, featuring a flexible metal trellis on top of an umbrella canopy interlaced with living plants and a solar-powered, automated irrigation system.

Their preferred plant for Living Umbrellas® is the Sun Parasol giant mandevilla, a flowering vine native to the tropics of Brazil that has been bred into multiple varieties and flower colors. The canopy is attached to lightweight fiberglass arms and a heavy-duty aluminum pole that is anchored to the patio with a sand-filled base. Everything can be shipped in one box and does not require any tools to assemble.

The Living Umbrella® features solar powered irrigation for commercial customers, who can simply add water to the tank on a weekly basis, and the automated system sends water to the canopy. The residential system offers a more traditional form of automation, with a timer that connects to a garden hose.

Learning from the Entrepreneurial Experience

Tilley and Cloyd owe a lot of their start-up success to the University of Maryland Innovation Gateway, including the Office of Technology Commercialization, the Maryland Technology Enterprise Institute (Mtech), as well as DC I-Corps, a regional program co-sponsored by the University of Maryland that is designed to foster, grow, and nurture an innovation ecosystem in the nation’s capital, the nearby states of Maryland and Virginia, and the mid-Atlantic region. They also learned valuable skills and found business mentors while participating in the Bethesda Green’s Innovation Lab.

Tilley’s company, Living Canopies Ltd., was selected for participation in the National Science Foundation’s national I-Corps cohort, which included a $50,000 grant. That sent the company to Houston, Texas, where they hit the pavement, talking with over 100 different potential customers.

“It was a huge epiphany to me when we did customer discovery,” Tilley explained. ‍ “The empathy map, trying to understand what other people think and feel and why - it was huge. Both professionally and personally, I learned a great deal from I-Corps.”

The customer discovery conducted during I-Corps also lead Tilley and Cloyd to find progressive restaurant owners like Vaso Volioti at Vaso’s Kitchen in Alexandria, Virginia, and Jason Miller at The Wine Kitchen in Frederick, Maryland, who were the first to buy Living Umbrellas. Once restaurant patrons began eating under the Living Umbrellas at these restaurants, they started calling Tilley to buy their own. This lead them to focus on designing a Living Umbrella that could be packed in a box and shipped across the country. Now, they have shipped their umbrellas as far away as Hawaii.

Through their tenacity in customer discovery, early trial sales, and grant proposal submissions, Tilley and Cloyd were also able to secure additional funding from the state’s TEDCO program through the University of Maryland.

Perfecting the Product and Where to Find It

The product has been through a few different iterations along the way since the initial model.

Over time, Tilley and Cloyd have designed a more streamlined and lightweight model. As they began going to trade shows and meeting with landscape architects and garden center owners who purchased the umbrellas, they received valuable customer feedback.

Tilley’s team continues to experiment with different umbrella designs, as well as new plants to create flowering canopies. Most recently, Tilley was awarded a patent from the United States Patent and Trademark Office (USPTO), #10,993,385.

They made a game-changing breakthrough when they brokered a deal with Sam’s Club, a national retailer owned by Walmart. The Living Umbrellas® are now available in select stores across the region, and Tilley hopes that will expand to other parts of the country.

“The path of a first-time entrepreneur is like riding a roller coaster during a marathon; there are ups and downs, quick turns, and a few loops that you have to overcome for a long period of time,” Tilley shared about their multi-year journey. “It takes persistence, quick learning, and a love for constantly meeting new people to make it. Great mentors and an ecosystem of support are also helpful.”

College Park, Maryland, residents can see the prominent Living Umbrellas® displayed in front of Vigilante Coffee on Rt. 1, one of the many local customers, which also include restaurants and businesses in other cities across the region, including Frederick, Maryland, and Old Town Alexandria, Virginia.

Tilley’s team continues to experiment with different umbrella designs, as well as new plants to create flowering canopies. Most recently, Tilley was awarded patent #10,993,385 from the United States Patent and Trademark Office (USPTO).