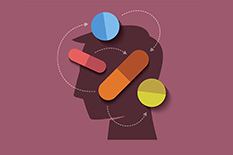 Many people suffering from both opioid use and mental health disorders receive treatment for neither, despite a significant proportion reporting unmet mental health needs, according to a new University of Maryland-led study.

Postdoctoral associate Priscilla Novak and Associate Professor Jie Chen from the UMD School of Public Health, along with researchers from Johns Hopkins University and the U.S. Department of Health and Human Services, investigated how the combination of mental illness and opioid use disorder (OUD) affects the treatment of both issues. Their findings are published in the March issue of the Journal of Substance Abuse Treatment.

Using data from a nationally representative survey, the researchers found that 47 percent of those suffering from both OUD and mild to moderate mental illness were not receiving care for either issue. Of those with serious mental illness and OUD, 21 percent got no treatment.

“The results suggest that there is room for much improvement in coordination of substance use disorder and mental health treatment,” the study notes. The research is part of Chen’s Hospital and Public Health Interdisciplinary Research Lab, which studies system-level care coordination among hospitals, communities and public health agencies that can improve population mental health and reduce health disparities.

Despite the availability of some services, many of the individuals surveyed who had OUD still had unmet need for mental health treatment—30 percent of those with mild or moderate mental health disorders and 60 percent with serious mental illness.

More than half of patients reported affordability as a barrier to care, often because their insurance wouldn’t cover enough of the cost. Many patients also said they feared the stigma associated with treatment.

Among those receiving mental health care, the most popular form of treatment was prescription medication. Yet psychotropic medications can present problems for those with opioid use disorder, such as heightening the effects of opioid use and making lower doses more potent, the study reports.