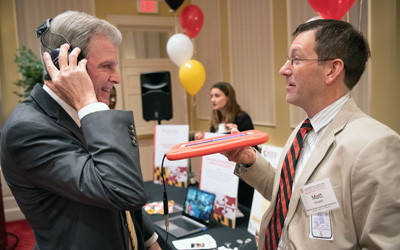 University of Maryland School of Dentistry Dean Mark Reynolds, DDS, PhD, MA, experiences what hearing sounds is like with a cochlear implant with Matt Goupell, PhD, associate professor in the Department of Hearing and Speech Sciences at College Park.

The two-hour expo designed to highlight the combined power of the two institutions to grow the state economy, advance research, and demonstrate service to Maryland citizens featured some of the best collaborations between the state’s largest research engines.

Sixteen joint programs were on display, many with interactive demonstrations, as faculty, students, and researchers explained their innovative work to members of the Maryland General Assembly.

Featured programs included the Maryland Cochlear Implant Center of Excellence, which combines the research of College Park’s hearing and speech sciences with the surgical and clinical expertise of the University of Maryland School of Medicine (UMSOM) to deliver advanced care to people with hearing loss; the Agriculture Law Education Initiative (ALEI), a collaboration between the University of Maryland Francis King Carey School of Law and University of Maryland College Park’s College of Agriculture and Natural Resources, which provides legal education to Maryland’s farmers; and the Fischell Institute for Biomedical Devices, which brings together scientists, physicians, health practitioners, and bioengineers to design and build biomedical devices.

“I get great pride as I walk around and see these projects,” said UMB Interim President Bruce Jarrell, MD, FACS, as he invited attendees to browse the demonstrations. Jarrell noted the collaboration will be strengthened even further with the recent announcement that UMB and UMCP will begin jointly reporting on federal, state, and local research grants. The move catapults Maryland onto the national scene as a billion-dollar research enterprise. “That is a major accomplishment,” he said, telling the audience, “you are in rarefied air.”

Since its creation in 2012 and the formal passage of Senate Bill 1052 in 2016, MPower has fostered hundreds of collaborations from both institutions that are growing Maryland’s innovation economy, advancing interdisciplinary research, increasing educational benefits, and addressing the state’s most critical issues. “This event and the MPower program couldn’t have happened without the support of the Maryland legislature,” Jarrell continued.

Former Maryland Senate President Thomas V. “Mike” Miller, LLB ’67, who was one of the original architects of MPower, agreed. “It’s wonderful to see the culmination of these two parts of the state come together, the two academic giants coming together to form this megalopolis,” said Miller, who received his undergraduate degree from UMCP and his law degree from Maryland Carey Law. “Now they’re working together and good things are happening.”

One of those good things is the Maryland Blended Reality Center, which combines the expertise of medical and computer science students to study how virtual reality technology can be used in a health care setting for diagnosis, pain management, and education. Medical students dressed in pink scrubs standing alongside their computer science peers encouraged MPower attendees to try on virtual reality goggles that transported wearers into an operating room as a surgeon performing a procedure.

“MPower funding has allowed us to work together as partners,” said Amitabh Varshney, PhD, dean of the College of Computer, Mathematical, and Natural Sciences at College Park and co-director of the Blended Reality Center. Sarah Murthi, MD, associate professor of surgery at UMSOM and co-director of the Blended Reality Center, agreed, saying, “It definitely brought together two things that wouldn’t normally come together, sort of like peanut butter and chocolate. It lets us create in a whole new way and it gives us the funds to really innovate.”

While innovative research is an important part of the strategic partnership, so too are the students at the heart of each institution. Adrianne Arthur, CPSM, director of operations and communications for MPower, noted that the funding creates opportunities for academic growth. “It [MPower] allows for greater experiences for students to connect to research, to connect to faculty, to go from one campus to another” she said.

“I had an interest in research as well as in nursing, but I wasn’t really sure how the two came together,” Saunders said. “This program really allowed me to figure out that research does play an important role in nursing and vice-versa.”

Maryland Carey Law second-year student Tori Long had a similar experience while working with ALEI as an intern at the Wye Research and Education Center on the Eastern Shore. During the internship, Long and Michael Marinelli, an undergraduate student at College Park’s College of Agriculture and Natural Resources, used their combined expertise to draft policy recommendations to benefit the Chesapeake Bay.

Long said working with Marinelli led to a broader understanding of the issues facing today’s farmers. “I understood the law, but I didn’t necessarily understand all the science behind it,” Long recalled. “We were able to balance our backgrounds to create these policies that included both disciplines.”

ALEI director Sarah Everhart, JD, said MPower funding has allowed ALEI to expand its reach and become an example for other states to follow. “We get asked all the time, ‘How do we establish a similar program in our state?’ We’re lucky to have MPower funding. Maryland is really uniquely situated in this way.”