Multi-Institutional Team Receives $4.3 Million Grant to Master the Evolution of the Transition Between Land and Sea

Multi-Institutional Team Receives $4.3 Million Grant to Master the Evolution of the Transition Between Land and Sea 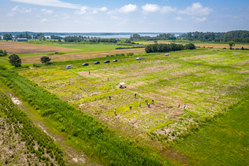 In recent years, as climate change and sea level rise have led to an increase in saltwater intrusion across coastal ecosystems, scientists are anxious to understand the specifics of how these systems are experiencing real change. The most profound changes are taking place at the interface of plants, soil, and water, otherwise known as the coastal critical zone, where a broad range of earth science disciplines intersect, including hydrology, ecology, geomorphology, and biogeochemistry (HEGB). Each discipline is a key factor when examining ecosystem changes across marshes, forests, and agriculture, which will ultimately affect society through impacts on agricultural land, water quality, and plants and animals. To better understand how to predict those changes as well as best management practices for critical zones, a team of researchers from the University of Maryland (UMD), University of Delaware, George Washington University, and other prominent institutions have received a $4.3 million grant from the National Science Foundation (NSF), which will initiate a multi-year process of data measurement, undergraduate student involvement, and public outreach and Extension work to educate farmers and stakeholders.

The team will be studying the three major sites that represent different areas of the Delmarva region, a large peninsula occupied by Delaware, Virginia, and Maryland. UMD’s Kate Tully, associate professor of agroecology in UMD’s College of Agriculture and Natural Resources and director of the AgroEcoLab, will lead the biogeochemistry team during the study, with an allotment of $725K over five years to study the effects of saltwater intrusion on the movement of nutrients and carbon in the soil and water.

“This is very exciting because we were the only coastal critical zone funded by the NSF this round,” says Tully. “By studying six strategically chosen sites in three locations that represent different areas of the Delmarva, we aim to learn how our coastal ecosystems will change in the future. We will improve our understanding of how saltwater intrusion and flooding will impact carbon and nutrient cycles.”

Tully concedes that you simply can’t model and predict ecosystem changes based on sea level rise; you need to take multiple drivers and feedback systems into account. In addition to biogeochemical feedbacks related to salinization, the group’s hypotheses address (1) major fast and slow hydrological drivers of coastal critical zone transition, and (2) landscape feedbacks, where ecological change drives geomorphological (the study of the physical features of the surface of the earth) evolution that then feeds back into hydrological and biogeochemical processes. These drivers and feedbacks differ between forested and agricultural land, and cumulatively determine the rate and extent of landscape transformation, as well as changes in coastal critical zone nutrient stocks and movements.

“We will address these interlinked hypotheses through interdisciplinary field observations, experiments, and modeling, fully integrated across three locations pairing marsh-forest and marsh-agriculture sites,” says Tully. “We’re excited to work with the NSF since they are trying to facilitate collaboration among all of the funded projects. The HEGB intersection is so important. We need to bring all of those disciplines to bear to truly understand the dynamics in the critical zone.”

Holly Michael, professor in the Departments of Earth Sciences & Civil and Environmental Engineering at University of Delaware, is the lead project investigator on the grant. In addition to managing the overall project and leading the hydrology team, she plans to recruit for external collaborations to connect with the critical zone network.

“The three states represented by our field sites are all on the Delmarva and experience similar effects of sea-level rise and flooding, but they also have some unique characteristics,” says Michael. “The Virginia site is most exposed to oceanic events such as hurricanes, and it has the highest salinity and lowest elevation gradient. Delaware is intermediate in exposure and salinity, but has the highest elevation gradient. Our Maryland sites have the least exposure to storms but also low elevation gradients. So by studying the three sites that represent different areas of the Delmarva, we learn about different ways that the systems are experiencing change.”

Michael explains that data delivery to NSF will include measurements of water levels, salinity, land surface elevation, tree mortality, sap flux, and solute concentrations, just to name a few. They will do some significant modeling and analysis of the data. There is also a diversity, outreach, and education component.

“NSF is interested in public education because it is important that the research we do is relevant to society,” says Michael. “So we do have a component of our project that involves public outreach, and we plan to connect with farmers, other stakeholders, and interested members of the public through workshops, Extension, and other interactions.”

Tully believes that the Delmarva and the North American Coastal Plain states have an opportunity to do research that will help on a global scale. There are also some significant policy implications, with Maryland leading the charge.

“The more that we can come up with strategies to help farmers and landowners, the better,” explains Tully. “Maryland is very progressive when it comes to environmental policies; take its cover crop program as a great example. It’s really great to work in Maryland where policymakers care about the environment and farmers. I’ve enjoyed my working relationship with the Maryland Department of Agriculture and Maryland Department of Planning over the past few years as they really understand and embrace these challenges.”