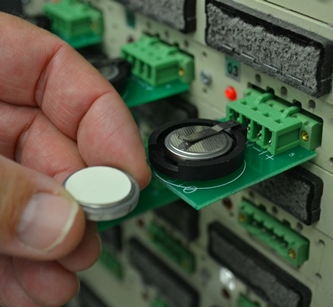 Current lithium-ion batteries—used to power cell phones, laptops, and electric vehicles—can trigger fires and, in some cases, explosions due to the liquid, organic charging mechanism. Wachsman and his UMD team have developed an all-solid-state lithium-ion battery that is safe, robustand low-cost, with a high-energy-density by using ceramic materials and processing methods. This new technology will also reduce manufacturing costs using scalable, ceramic fabrication techniques that do not require dry rooms or vacuum equipment.

"Due to their all-solid-state construction, these lithium-ion batteries are non-flammable and intrinsically safe,” said Wachsman. “Moreover—due to their novel, high conductivity materials and fabrication methods, they will exceed current goals for electric vehicle range, acceleration, and cost.”

These new battery designs prevent overheating, are immune to catastrophic failure, and can be incorporated into the structure of a vehicle to improve strength in some cases. Much of this can be accomplished at a 30% lower cost compared to conventional batteries, thus bolstering widespread adoption of EVs. Greater use of EVs would reduce U.S. greenhouse gas emissions, 28% of which come from the transportation sector. In addition, the mass adoption of EVs would diminish the demand for petroleum, dramatically reducing U.S. dependence on foreign oil.

UMD is currently No. 1 among all U.S. universities in active awards from ARPA-E. Since the inception of ARPA-E in 2009, UMD has participated in 15 projects, leading 11 of those projects. Currently, the university is participating in 13 projects funded by ARPA-E, 10 of which are led by UMD, placing the university at the top of the list of awardees both as lead organization and total active awards. To date, ARPA-E has awarded UMD participating teams more than $42 million for its energy research efforts.

For more information on the University of Maryland’s Energy Research Center: energy.umd.edu