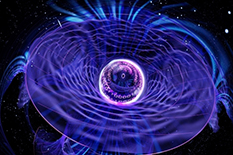 A research team led by scientists in the Joint Quantum Institute at the University of Maryland have implemented an experimental test for quantum scrambling, a chaotic shuffling of the information stored among a collection of quantum particles. The work has potential applications in quantum computing, and might even help reveal what occurs when quantum information gets pulled into a black hole.

Their experiments on a group of seven atomic ions demonstrate a new way to distinguish between scrambling—which maintains the amount of information in a quantum system but mixes it up—and true information loss. Published in the March 7 issue of Nature, their protocol may one day help verify the calculations of quantum computers.

“In terms of the difficulty of quantum algorithms that have been run, we’re toward the top of that list,” says Kevin Landsman, a graduate student in University of Maryland department of physics, a researcher at JQI, and lead author of the new paper. “This is a very complicated experiment to run, and it takes a very high level of control.”

The research team—also includes JQI Fellow and UMD Distinguished University Professor Christopher Monroe; JQI Fellow Norbert Linke; Caroline Figgatt, now at Honeywell; Thomas Schuster at the University of California Berkeley; Beni Yoshida at the Perimeter Institute for Theoretical Physics; and Norman Yao at UC Berkeley and Lawrence Berkeley National Laboratory—performed their scrambling tests by carefully manipulating the quantum behavior of seven charged atomic ions using well-timed sequences of laser pulses. They found that they could correctly diagnose whether information had been scrambled throughout the system of seven atoms with about 80 percent accuracy.

“With scrambling, one particle’s information gets blended or spread out into the entire system,” Landsman says. “It seems lost, but it’s actually still hidden in the correlations between the different particles.”

Quantum scrambling is a bit like shuffling a fresh deck of cards. The cards are initially ordered in a sequence, ace through king, and the suits come one after another. Once it’s sufficiently shuffled, the deck looks mixed up, but—crucially—there’s a way to reverse that process. If you kept meticulous track of how each shuffle exchanged the cards, it would be simple (though tedious) to “unshuffle” the deck by repeating all those exchanges and swaps in reverse.

Quantum scrambling is similar in that it mixes up the information stored inside a set of atoms and can also be reversed, which is a key difference between scrambling and true, irreversible information loss.

Landsman and colleagues used this fact to their advantage in the new test by scrambling up one set of atoms and performing a related scrambling operation on a second set. A mismatch between the two operations would indicate that the process was not scrambling, causing the final step of the method to fail.

That final step relied on quantum teleportation—a method for transferring information between two quantum particles that are potentially very far apart. In the case of the new experiment, the teleportation is over modest distances—just 35 microns separates the first atom from the seventh—but it is the signature by which the team detects scrambling: If information is successfully teleported from one atom to another, it means that the state of the first atom is spread out across all of the atoms—something that only happens if the information is scrambled. If the information was lost, successful teleportation would not be possible.

For an arbitrary process whose scrambling properties might not be known, this method could be used to test whether—or even how much—it scrambles.

The experiment was originally inspired by the physics of black holes. Scientists have long pondered what happens when something falls into a black hole, especially if that something is a quantum particle. The fundamental rules of quantum physics suggest that regardless of what a black hole does to a quantum particle, it should be reversible—a prediction that seems at odds with a black hole’s penchant for crushing things into an infinitely small point and spewing out radiation. But without a real black hole to throw things into, researchers have been stuck speculating.

Quantum scrambling is one suggestion for how information can fall into a black hole and come out as random-looking radiation. Perhaps, the argument goes, it’s not random at all, and black holes are just excellent scramblers.

“Regardless of whether real black holes are very good scramblers, studying quantum scrambling in the lab could provide useful insights for the future development of quantum computing or quantum simulation,” Monroe says.

This work was supported in part by the Army Research Office (ARO) through the IARPA LogiQ program, the Air Force Office of Scientific Research through the Multidisciplinary University Research Initiative (MURI) on Quantum Measurement and Verification, the ARO MURI on Modular Quantum Circuits, the DOE’s  Advanced Scientific Computing Research program, and the NSF Physics Frontier Center at JQI. T. Schuster and N.Y. Yao acknowledge support from the DOE under contract PHCOMPHEP-KA24 and the Office of Advanced Scientific Computing Research, Quantum Algorithm Teams Program. Research at the Perimeter Institute is supported by the Government of Canada through Industry Canada and by the Province of Ontario through the Ministry of Research and Innovation. T. Schuster acknowledges support from the NSF Graduate Research Fellowship Program under Grant No. DGE 1752814.