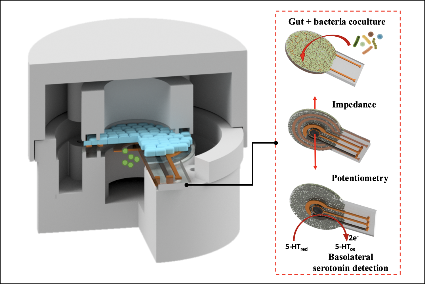 A University of Maryland (UMD) team has been awarded a $1 million grant by the National Science Foundation’s Integrative Strategies for Understanding Neural and Cognitive Systems (NCS) program to investigate the complex effects of intestinal serotonin on both gut and brain health. The project, “Developing engineering solutions to investigate microbiome-to-neuron communication,” aims to provide a more realistic picture of the complex gut-microbiome-brain axis system (GMBA).

Neuroscientists recently have become interested in the connection between the gut and the brain as a way to comprehend the molecular causes of neural activation and behavior. Intuitively, this connection makes sense: think, for example, about how difficult it can be to focus when you are experiencing gut pain, or, alternatively, how you might have a knot in your stomach when you feel anxious. Facilitating this connection are neurotransmitters, the molecules that spur the nervous system to action.

The neurotransmitter serotonin, produced by the gut lining, regulates the link between gut and brain, affecting everything from bowel function to one’s mood. Influencing this serotonin production is the gut microbiome, or the community of microorganisms that live in the human digestive tract. However, while neuroscientists know generally that the gut microbiome stimulates the generation of gastrointestinal serotonin, it is less well understood how specific bacterial species influence serotonin’s production and, subsequently, by what pathways this serotonin affects neural processes. Current technology is unable to effectively study gut microbiome-triggered cellular and molecular signaling up close and in real time, but the UMD team proposes to fill this knowledge gap by combining expertise from engineering, neuroscience, applied microbiology, and physics to monitor and model the real-time processing of gut microbiome serotonin activity.

The platform created by the UMD team will provide a fuller picture of the GMBA by packaging simplicity, novelty, and customizability. The team will first culture a model of the gut lining using bioengineering techniques to monitor the gut’s creation of serotonin through multimodal integrated electrodes. Then, they will colonize the gut lining with different combinations of gut bacteria. In order to measure the neurophysiological effects of the different serotonin productions of these colonies, the platform will integrate the nervous system and innervated hindgut of a crayfish model system; this will provide data about the relationship between the central and enteric nervous systems as well as about corresponding hindgut motility. Finally, the project will use machine learning to process the results through a computer model that simulates the outcomes of different combinations of gut bacteria. This will provide the clearest picture yet of how a system as complex and individually unique as the gut microbiome impacts both gut and brain health.

The award, which provides three years of funding, leverages UMD’s expertise in electrical and computer engineering, bioengineering, molecular biology, neuroscience, physics, and data science. The project’s principal investigator is Professor Reza Ghodssi (ECE/ISR/Fischell Institute), and it has three co-PIs: Professor William Bentley (BioE/Fischell Institute/IBBR), Associate Professor Jens Herberholz (Psychology/NACS), and Professor Wolfgang Losert (Physics/IPST/IREAP). “Past studies of the gut microbiome have often relied upon germ-free mice, by which the effects of gut bacteria are observed through the colonization of these animals' sterile intestines,” Ghodssi notes. However, the interdisciplinary nature of the UMD team’s project allows for a novel assessment of the gut-microbiome-brain axis. Ghodssi continues, “Our new discovery platform provides an alternative approach to this exciting arena of GMBA research by developing microsensors to extract and measure real-time data on how cells and molecules communicate and by connecting these to a proxy for the human nervous system. With its many applications for the study of brain and behavior, we believe that this collaborative effort can significantly advance the field of neuroscience.”

Pilot data for this project was gathered thanks to a seed grant award from UMD’s Brain and Behavior Initiative (BBI) for “A Multimodal Sensor Discovery Platform to Study the Molecular Events Underlying the Gut-Microbiome-Brain-Axis.” To date, BBI’s Seed Grant Program has generated $12.5 million in external awards from an investment of $1.3 million. BBI recently announced the latest projects to be awarded seed grants.

NCS is part of NSF’s recent coordinated research efforts that seek to accelerate the development of neurotechnologies, particularly the Understanding the Brain program and the Brain Research through Advancing Innovative Neurotechnologies (BRAIN) Initiative. NCS supports interdisciplinary research across the sciences and engineering in order to tackle some of the most difficult challenges for understanding the brain in action and in context.

University of Maryland Severe Research Restrictions Extended Through May 15