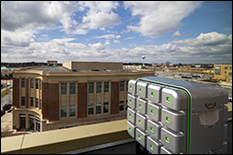 Transformative energy conversion technology being developed by Dr. Wachsman and the company he founded to commercialize that technology, Redox Power Systems was highlighted in NATURE, an international weekly journal of science.

Written by Dr. John P. Lemmon, an Advanced Research Projects Agency-Energy (ARPA-E) Program Director, the article appeared in the September 24, 2015 issue of NATURE.  Dr. Lemmon started a research program in 2014 to fund “Reliable Electricity Based on Electrochemical Systems”, also known as REBELS.  This program directs $33 million to fuel cell research projects, of which the largest award was to Redox Power Systems, a fuel cell company started at Maryland by Dr. Wachsman.

The Redox technology is unique in its ability to directly convert the chemical energy of fuels, such as natural gas, to electricity at power densities much greater than typical fuel cells.  A Redox “Cube” fuel cell can be deployed for numerous applications such as distributed generation, providing a lower carbon footprint source of electric power that is independent of grid outages.  The research conducted by Dr. Wachsman at the University of Maryland Energy Research Center (UMERC) and Redox has pushed their solid oxide fuel cell technology toward commercialization while maintaining record high power density at dramatically lower operating temperatures.  This reduces the cost, size, and weight of reliable on-site electricity generation systems, such as the Redox fuel cell.

"The REBELS program initiated by Dr. Lemmon crossed the boundaries of the existing fuel cell funding agencies to spur the development of truly transformational technology, and it is extremely gratifying to have been chosen as an awardee in this program." - Dr. Wachsman