Salamanders Shrink as Their Mountain Havens Heat Up

Salamanders Shrink as Their Mountain Havens Heat Up 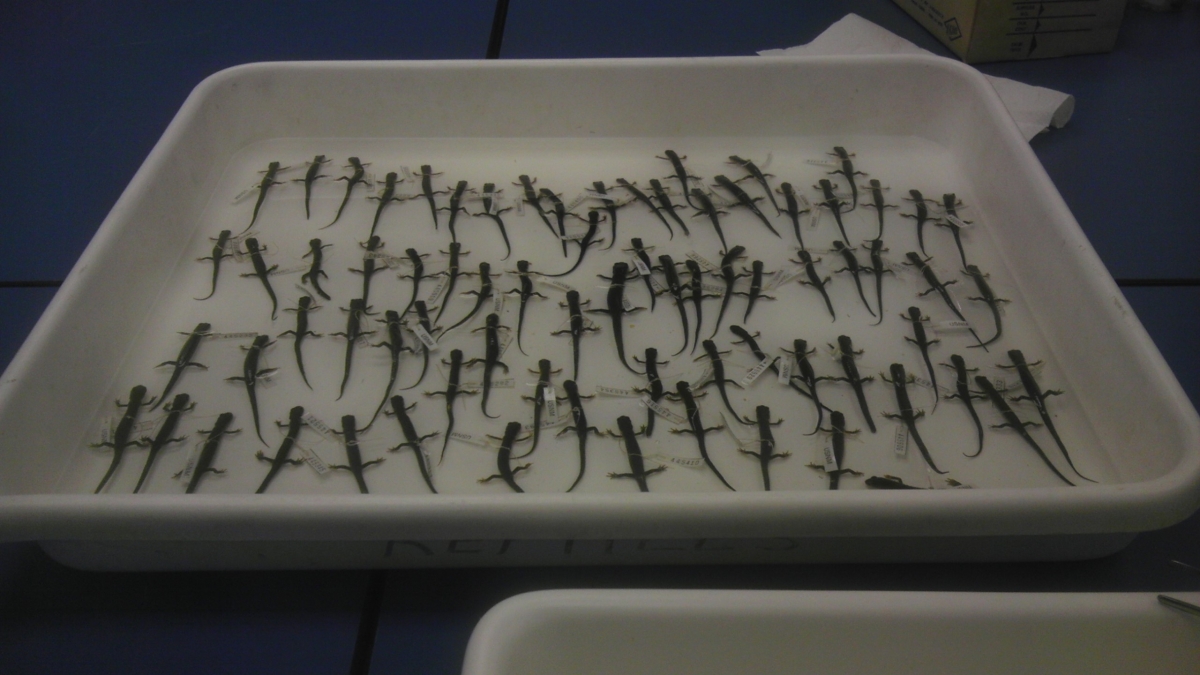 This tray full of northern-cheeked salamanders, collected decades ago by Prof. Richard Highton, are stored in a Smithsonian Institution in Suitland, MD Karen Lips and colleagues used them to show that Appalachian salamander species are getting smaller in response to climate change.
Wild salamanders living in some of North America's best salamander habitat are getting smaller as their surroundings get warmer and drier, forcing them to burn more energy in a changing climate.

That's the key finding of a new study, published March 25 in the journal Global Change Biology, that examined museum specimens caught in the Appalachian Mountains from 1957 to 2007 and wild salamanders measured at the same sites in 2011-2012. The salamanders studied from 1980 onward were, on average, 8% smaller than their counterparts from earlier decades. The changes were most marked in the Southern Appalachians and at low elevations – settings where detailed weather records showed the climate has warmed and dried out most.

Scientists have predicted that some animals will get smaller in response to climate change, and this is strongest confirmation of that prediction.

"This is one of the largest and fastest rates of change ever recorded in any animal," said Karen R. Lips, an associate professor of biology at the University of Maryland and the study's senior author. "We don't know exactly how or why it's happening, but our data show it is clearly correlated with climate change." And it's happening at a time when salamanders and other amphibians are in distress, with some species going extinct and others dwindling in number.

"We don't know if this is a genetic change or a sign that the animals are flexible enough to adjust to new conditions," Lips said. "If these animals are adjusting, it gives us hope that some species are going to be able to keep up with climate change."

The study was prompted by the work of University of Maryland Prof. Emeritus Richard Highton, who began collecting salamanders in the Appalachian Mountains in 1957. The geologically ancient mountain range's moist forests and long evolutionary history make it a global hot spot for a variety of salamander species. Highton collected hundreds of thousands of salamanders, now preserved in jars at the Smithsonian Institution's Museum Service Center in Suitland, MD.

But Highton's records show a mysterious decline in the region's salamander populations beginning in the 1980s. Lips, an amphibian expert, saw a similar decline in the frogs she studied in Central America, and tracked it to a lethal fungal disease. She decided to see whether disease might explain the salamander declines in the Appalachians.

Between summer 2011 and spring 2012, Lips and her students caught, measured and took DNA samples from wild salamanders at 78 of Highton's collecting sites in Maryland, Virginia, West Virginia, Tennessee and North Carolina. Using relatively new techniques for analyzing DNA from preserved specimens, the researchers tested some of Highton's salamanders for disease.

Lips found virtually no fungal disease in the museum specimens or the living animals. But when she compared size measurements of the older specimens with today's wild salamanders, the differences were striking.

Between 1957 and 2012, six salamander species got significantly smaller, while only one got slightly larger. On average, each generation was one percent smaller than its parents' generation, the researchers found.

The researchers compared changes in body size to the animals' location and their sites' elevation, temperature and rainfall. They found the salamanders shrank the most at southerly sites, where temperatures rose and rainfall decreased over the 55-year study.

To find out how climate change affected the animals, Clemson University biologist Michael W. Sears used a computer program to create an artificial salamander, which allowed him to estimate a typical salamander's daily activity and the number of calories it burned. Using detailed weather records for the study sites, Sears was able to simulate the minute-by-minute behavior of individual salamanders, based on weather conditions at their home sites during their lifetimes.

The simulation showed the modern salamanders were just as active as their forbears had been. But to maintain that activity, they had to burn 7 to 8 percent more energy. Cold-blooded animals' metabolisms speed up as temperatures rise, Sears explained.

To get that extra energy, salamanders must make trade-offs, Lips said. They may spend more time foraging for food or resting in cool ponds, and less time hunting for mates. The smaller animals may have fewer young, and may be more easily picked off by predators.

"Right now we don't know what this means for the animals," Lips said. "If they can start breeding smaller, at a younger age, that might be the best way to adapt to this warmer, drier world. Or it may be tied in with the losses of some of these species."

The research team's next step will be to compare the salamander species that are getting smaller to the ones that are disappearing from parts of their range. If they match, the team will be one step closer to understanding why salamanders are declining in a part of the world that once was a haven for them.

This research was funded by the University of Maryland-Smithsonian Institution Seed Grant Program.