"Their Stories Have Not Been Told"

"Their Stories Have Not Been Told" 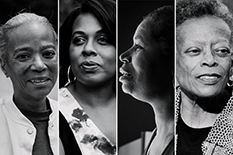 Thurka Sangaramoorthy, an anthropologist and public health researcher, studies HIV disparities among African Americans and black immigrant groups primarily living in the southern United States. In a new project, she chronicles the lives of African-American women living with HIV in Prince George’s County, Md., in the hopes of bringing their often-ignored stories to light.

Sangaramoorthy is working on visualizing the women’s narratives through a series of photo essays and plans to eventually compile a book and exhibit highlighting their resilience in the face of adversity.