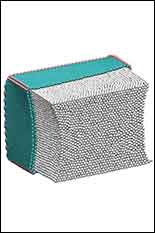 Hydrogen (white) is packed into a tiny box made of graphene, which researchers at the University of Maryland in College Park can open and close using electricity. Credit: Maryland NanoCenter

COLLEGE PARK--Just when you thought your origami skills couldn’t be beat – try using the world’s thinnest material, making the origami fold and unfold itself, and packing more inside than anyone expected. Researchers from the University of Maryland have done just that.

Graphene is the world's thinnest material, just one atom thick. Shuze Zhu and Teng Li, of the Department of Mechanical Engineering, have found that they can make tiny squares of graphene fold into a box, which will open and close itself in response to an electric charge.

Inside the box, they’ve tucked hydrogen atoms, and have done so more efficiently than was thought possible. The U.S. Department of Energy is searching for ways to make storing energy with hydrogen a practical possibility, and they set up some goals: by 2017, the Department had hoped that a research team could pack in 5.5 percent hydrogen by weight, and that by 2020, it could be stretched to 7.5 percent.

Li’s team has already crossed that threshold, with a hydrogen storage density of 9.5 percent hydrogen by weight.  The team has also demonstrated the potential to reach an even higher density, a future research goal.

“Just like paper origami that can make complicated 3-D structures from 2-D paper, graphene origami allows us to design and fabricate carbon nanostructures that are not naturally existing but of desirable properties,” said Li an Associate Professor of Mechanical Engineering, and a member of the Maryland NanoCenter, UMERC and a Keystone professor in the A. James Clark School of Engineering. “We have made nano-baskets, as well as these new nano-cages to hold hydrogen and other molecular cargos.”

The U.S. National Science Foundation supported the team’s research, which will be published in the journal ACS Nano.