Tracing the Fallout of Hitler's Nuclear Reactor That Wasn't

Tracing the Fallout of Hitler's Nuclear Reactor That Wasn't 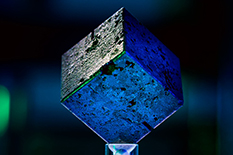 A cube of uranium from a failed German World War II-era nuclear reactor sent doctoral student Miriam Hiebert and Associate Research Professor Tim Koeth on a quest to uncover its history; Koeth (bottom) traveled to Haigerloch, a small town in Germany where scientists tried to start a reactor in a cave beneath a castle.
(Photos by John T. Consoli; black-and-white photo courtesy of Tim Koeth)

It isn’t every day that a black cube of Nazi uranium mysteriously appears on your desk in College Park.

When it does, however, the probability that your name is Associate Research Professor Tim Koeth approaches 100 percent. Koeth is known among a small community of like-minded enthusiasts as a collector of radiological oddities, including whimsical early 20th-century uranium glassware that glows a Martian green under UV light and a range of Geiger counters.

But the evil-looking, roughly cast hunk of radioactive metal that fell into his hands in summer 2013, accompanied by a cryptic note—“Taken from the reactor that Hitler tried to build. Gift of Ninninger."—differed markedly from the other artifacts he’s collected from childhood.

The two-inch cube—don’t worry, it’s not kept on campus or sufficiently radioactive in its non-enriched state to threaten bystanders—sent Koeth and engineering doctoral student Miriam "Mimi" Hiebert, who volunteered to help, on a years-long quest to uncover its history. Their article on the cube’s 70-year journey was published today in Physics Today.

“To me, this cube represents a relic of the program that catalyzed the Manhattan Project and subsequently, both good and bad—weapons, nuclear energy, nuclear medicine,” Koeth said. “It’s the dawning of a new era in human existence, when for the first time, we either had the capacity to save ourselves, or completely destroy ourselves.”

Unfolding like a detective story, the Physics Today article details how the uranium cube was manufactured as part of Nazi Germany’s failed drive to build a nuclear reactor. Reports of German progress in nuclear physics had already spurred the creation of the Manhattan Project, culminating in the atomic bombing of Japan.

In the war’s waning days, U.S. authorities got their first look at the actual state of the German effort—“which was pitiful,” Koeth said. Instead of a weapons program, they discovered German scientists had tried to build a reactor in a cave beneath a castle in Haigerloch in southwestern Germany, but could never get the device to work. As Germany collapsed, its scientists had buried the uranium and fled, but U.S. troops unearthed the cubes in April 1945.

Koeth and Hiebert found historical records detailing how U.S. authorities shipped the cubes to Paris, but what came next is unclear. Along with Koeth’s cube, several others are known to exist in the United States, including one at the Smithsonian Institution and another used in science classes at Harvard University.

By strange coincidence, a few days after Koeth received the unknown Ninninger’s cube through channels he won’t fully disclose, he was browsing at a used bookshop and stumbled across “Materials for Atomic Science” by Robert D. Nininger with two rather than three “n”s. He tracked down the author’s widow, and discovered he’d served in the Manhattan Project group charged with procuring uranium. By the time the 664 cubes reached U.S. shores—assuming they all did—so much uranium had been stockpiled that they wouldn’t have been needed. So what happened to them next?

It’s a question that Hiebert—who’s planning a book about it after she finishes her Ph.D. dissertation in materials science and engineering—intends to answer.

She met Koeth, who oversaw UMD’s research reactor in his previous position as director of radiation facilities, while using the device to study preservation methods for historic glass and stone objects. Koeth figured her historical bent could come in handy for the Nazi uranium quest, and Heibert said, “Tim just has a way of sucking people into his odd orbit.”

Another find by Koeth, as he was digging through records at the National Archives at College Park in 2014, cast the project in a new light. In a box labeled “German Uranium,” he discovered documents, including some recently declassified by the CIA, revealing that 400 other uranium cubes had existed in Germany—part of a competing reactor project.

While most were likely taken by the Soviets, a tragicomic trade arose following the war dealing in some cubes that had slipped away. Rumored to be wildly valuable, they were in fact worth several dollars a pound, Koeth says.

What’s chilling about the archival discovery was Koeth’s calculation that had Nazi German authorities forced the competing science teams to work together—as the United States had done in the Manhattan Project—the full tally of German uranium used in one facility would likely have resulted in a functional nuclear reactor for Hitler’s Germany.

It was, Koeth and Hiebert write, “a failure worth celebrating.”

Read more about Tim Koeth's research and teaching, not to mention his childhood adventures with radiation, in Terp.