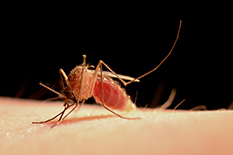 A $2 million NIH grant will fund a study of northern house mosquitoes to find out what makes some of them attracted to humans rather than other animals, with the aim of reducing the spread of West Nile virus.
(Photo by Megan Fritz)

The National Institutes of Health (NIH) has awarded $2 million to a University of Maryland researcher to study when and where mosquitoes are most likely to transmit West Nile virus to humans, with the aim of reducing the disease’s spread in metropolitan areas.

The grant seeks to establish that transmission to humans of typically avian diseases like West Nile is caused by genetic changes in the mosquitoes that carry the virus. Scientists currently suspect that interbreeding between two forms of the northern house mosquito, Culex pipiens, contributes to the spread of West Nile to humans in North American metropolitan areas; Assistant Professor Megan Fritz’s work looks to isolate the specific genes responsible for transmission and create a model to predict where outbreaks will occur.

The entomologist’s work with Carolyn McBride of Princeton University and Rebecca Smith of the University of Illinois will shed light on the molecular underpinnings of something that remains unclear, particularly in Culex mosquitoes: what attracts mosquitoes to people instead of other hosts, Fritz said.

“Our work will not only add to a growing body of knowledge on the neurogenetics of host preference in mosquitoes, it will also apply that knowledge to address a specific public health problem: predicting where and when humans are at highest risk of exposure to West Nile virus here in North America,” she said.

More than 2,600 people were sickened last year by the virus—the highest total in more than a decade—according to Centers for Disease Control data. About 20% of those infected develop a fever and other symptoms, and about 1 out of 150 develop a serious, potentially fatal illness, the CDC says.

Northern house mosquitoes are found across most northern latitudes and adapt well to different environments. In the case of West Nile, the important adaptations relate to host selection, or what the mosquito chooses to feed on. They typically prefer avian hosts, but when bred with a rare mammal-preferring form of Culex pipiens, the offspring toggle between avian and mammalian feeding.

As a result, this hybrid mosquito can acquire West Nile by feeding on birds and also be chemically attracted to mammalian populations, including humans, to whom they spread it.

Fritz will gather field data in several areas in and around Chicago with a statistically higher risk for human cases of West Nile to see if the mosquitoes there possess genetic markers for attraction to humans.

By supplementing existing epidemiological models with empirical information about mosquito genetics, Fritz aims to help reduce West Nile in metropolitan regions across the U.S., while taking a major step toward determining the genetic variants that inform host selection generally in mosquitoes.

Seed grant funding from UMD’s Brain and Behavior Initiative, which to date has generated $12.5 million in external awards from an investment of $1.3 million, supported the gathering of pilot data for this project.

University of Maryland Severe Research Restrictions Extended Through May 15