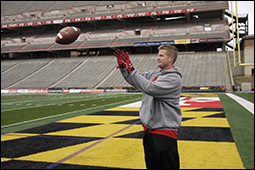 Making a great catch like this season’s astonishing three-fingered touchdown reception by New York Giants receiver Odell Beckham Jr. requires exceptional timing, skill, strength, hand-eye coordination and … sticky gloves. Now football players at all levels have a new way to put the sticky back on their favorite gloves. Grip Boost LLC, a company formed by University of Maryland (UMD) students and alumni, has created an inexpensive, quick-drying gel that keeps football gloves ready for the next great play.

The company’s founders combined their expertise in science and sports to produce Grip BoostTM, the first product on the market to restore old gloves to a like-new condition that leaves no residue on the ball.

Football players from youth leagues to the NFL often wear gloves coated with a tacky polymer that helps keep the ball from slipping through their hands, but the stickiness doesn’t last very long.

“Depending on your position and the game, they could last anywhere from a few weeks to only a few plays before the [original] coating wears down,” says former University of Maryland and Baltimore Ravens tight end Matt Furstenburg (B.S. ’12), one of Grip Boost’s cofounders. “In the NFL, I would go through a pair of gloves every three or four days.”

New gloves retail from $20 to over $80 a pair. That’s not a problem for a professional or Division I college team, but it’s a major expense for youth league and high school players, who typically have to buy their own non-essential equipment. Furstenburg saw an opportunity to create an affordable product that could restore a pair of gloves’ tackiness and make them last longer.

He teamed up with co-founder Harry Geller, an entrepreneur-in-residence at the Dingman Center, part of UMD’s Robert H. Smith School of Business. The Maryland Technology Enterprise Institute connected the pair with their future cofounders, all members of Professor Srinivasa Raghavan’s research group at the A. James Clark School of Engineering’s Department of Chemical and Biomolecular Engineering.

Raghavan’s group has extensive experience developing products made with strategically modified chitosan, a natural biopolymer with high adhesive and tack properties. Because it is non-toxic and adheres to skin, tissue and cells, the group has previously used it to develop blood-clotting bandages, foams and surgical sprays.

“We found it sticks to footballs pretty well, too,” says cofounder Chanda Arya (Ph.D. ’14), one of Raghavan’s former students.

Arya, along with fellow cofounders and lab-mates Kevin Diehn (M.S. ’14) and Zachary Rom (B.S. ’15), took up the challenge of creating a chitosan-based, NCAA-compliant product that did not leave residue on the ball, did not exceed the tackiness of existing gloves, and could be used quickly and easily. The team verified Grip Boost met the first two requirements using friction coefficient, tack and residue tests, and addressed the third by making the modified chitosan highly soluble in alcohol.

The result was a quick-drying, easy to use, clear gel.  Players apply a small amount to their gloved hands and rub them together. When the alcohol evaporates 15–20 seconds later, a thin, tacky film is left behind, restoring the gloves to their original condition. A two-ounce bottle of Grip Boost contains about 60 applications.

“We had 100 percent adoption among the players who tried it,” he says. “We’ve also seen a very positive response in social media and online product reviews.”

Grip Boost currently manufactures and sells their patent-pending product in small batches, but recently received a $100,000 Maryland Innovation Initiative grant to support direct commercialization. The company will use the funding to scale up production and lower costs.

“At best, a youth football player or their parents are going to buy one or two pairs of gloves per season,” says Arya. “Grip Boost is designed to make them last. That can have a real impact on students or teams with tight budgets.”