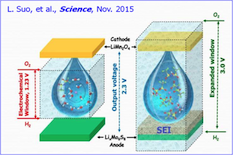 Researchers at the University of Maryland (UMD) are revolutionizing energy storage with a new class of aqueous electrolytes that makes batteries and other electrochemical devices safer, cheaper, and greener.

The safety hazards of today’s lithium-ion batteries are well known – toxicity, instability, and flammability – notably grounding the Boeing 787 Dreamliner after a series of fires.

These shortcomings have inspired a team of UMD researchers, with collaborators from the U.S. Army Research Laboratory, to find a solution: a Water-in-Salt electrolyte that offers safety without sacrificing energy density or power density.

Dr. Wang and his fellow researchers are eager to take these electrolytes to the next step and create a battery that will demonstrate the power and promise of this new technology.

“We plan to transition this scientific breakthrough into a real product,” said Dr. Wang. “We will receive $3M from ARPA-E with $1M matching to demonstrate the real value of our invention. We are working with Saft American Inc, Army Research Lab, and Liox to scale up our technology into a 500 Watt-hour battery pack. From there, we hope that our batteries can find their way into a variety of applications in civilian and military sectors, such as grid storage or on-board energy storage components on naval submarine vessels.”

Looking toward the future, this invention will be a critical step in fulfilling the long-awaited hopes of replacing the current electrolyte solvents found in lithium-ion batteries.

“Our invention has the potential to transform the energy industry by replacing flammable, toxic lithium-ion batteries with our safe, green Water-in-Salt battery,” said Dr. Wang. “This technology may increase the acceptance and improve the utility of battery-powered electric vehicles, and enable large-scale energy storage of intermittent energy generators like solar and wind.”

UMD’s Office of Technology Commercialization has nominated the invention for the Invention of the Year award in the Physical Sciences category. Winners will be announced at the Celebration of Innovation and Partnerships on May 9th as part of the University of Maryland’s “30 Days of EnTERPeneurship.”

To learn more about the University of Maryland’s “30 Days of EnTERPreneurship,” visit: http://www.umd.edu/30Days/.