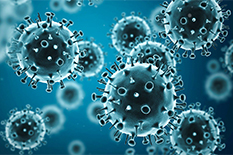 UMD researchers with the Virginia-Maryland College of Veterinary Medicine are working to produce a universal flu vaccine effective on any strain of the flu.
(Flu viruses illustration by Shutterstock)

The familiar refrain from doctors and public health experts—“Get your flu shot!”—often comes with the caveat that this year’s vaccine might not protect well against whatever turns out to be the most prevalent strain of the illness.

The research will be conducted by the Virginia-Maryland College of Veterinary Medicine, a joint effort of the UMD College of Agriculture and Natural Resources and Virginia Tech. They received the award based on the strength of previous work in this area—particularly a new technology for an intranasal vaccine, as opposed to an injection into muscle tissue.

This new vaccine delivery technique would not only provide a first line of defense beyond the capability of traditional vaccines, but would be safe and effective for higher risk populations like the young and elderly. With up to 20 percent of the U.S. population getting the flu each year and even more worldwide, the development of a universal flu vaccine stands to have a huge global impact.

“Developing a universal vaccine is a hot topic in the world now,” said Xiaoping Zhu, principal investigator for the project and associate dean and chair of the Department of Veterinary Medicine at UMD. “The current vaccine for seasonal flu only provides about 20 to 30% protection in recent years, which is low. Many people complain that they get the vaccine but still get infected.”

The effectiveness of current vaccines varies from year to year, largely based on how accurately the World Health Organization (WHO) and associated labs can predict what strains are going to be prominent in the next flu season. Once the predictions are made, it takes between seven and nine months to actually produce the vaccine, enough time for flu strains to change and render vaccines ineffective.

“The seasonal flu vaccine is always behind the flu season,” Zhu said. “But if we can focus on conserved regions of antigens with our vaccine that are common in all flu viruses, the strain won’t matter. That is the goal of a universal flu vaccine.”

Seasonal flu vaccines are also ineffective against pandemic flu events, where a new kind of virus emerges and spreads quickly. There have been five known flu pandemics recorded, the first arriving in 1918, when the Spanish flu killed between 50 million and 100 million people.

“Pandemics still threaten our society globally, with the latest case in 2009 jumping from pigs to humans as H1N1 swine flu,” Zhu said. “In these cases of antigen shift, the seasonal flu vaccine won’t help, but a universal vaccine would.”

Zhu and his team—Weizhong Li, assistant research professor in the UMD Department of Veterinary Medicine, and Susan Park Ochsner Ph.D. ’18, a former graduate student of Zhu’s and now a postdoctoral fellow at Harvard Medical School—have been laying the groundwork to participate in the race for the universal flu vaccine for over a decade, preparing preliminary data and patenting a new vaccine delivery technology.

Traditional vaccines are administered through the injection of inactivated virus into the muscle to help fight the infection when it occurs. But with intranasal delivery through the nose cavity and directly into the lungs, this new method can induce what is called local immunity to the flu virus, protecting you before the virus even infects you.

This protein-based process is also safer for everyone, including very young and elderly people who are more susceptible to the virus and for whom vaccination poses a greater risk. This novel vaccine delivery method is being patented by UMD, and makes the work that Zhu is doing different from others in the game seeking to develop an injection-based universal flu vaccine.

“This is very competitive work with a huge impact on the whole world, and many other labs are working on a universal vaccine, but we used our unique idea and technology to get this funding,” says Zhu. “We have a track record of several publications around this novel new technology.”