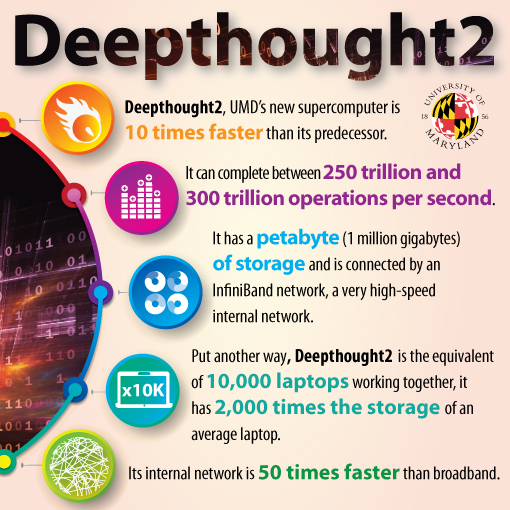 The University of Maryland unveiled Deepthought2 today, one of the nation's fastest university-owned supercomputers, to support advanced research activities ranging from studying the formation of the first galaxies to simulating fire and combustion for fire protection advancements. Developed with high-performance computing solutions from Dell, Deepthought2 has a processing speed of about 300 teraflops.

Deepthought2 is a significant asset of the new Cyberinfrastructure Center – a 9,000-square-foot data facility located in the Rivertech Building in the university's M Square Research Park.

"To be among the best requires research and educational facilities that are among the best," said University of Maryland President Wallace D. Loh. "Deepthought2 will attract top researchers and students who need its data-intensive computing power," Dr. Loh said.

Several university divisions and colleges and researchers from a variety of disciplines worked together to obtain this new central computing resource and to bring online the new Cyberinfrastructure Center – a facility specifically designed to provide the needed space, energy efficient climate control, and backup power for the supercomputer.

"Deepthought2 places the University of Maryland in a leadership position in the use of high-performance computing in support of diverse and complex research," said Ann G. Wylie, professor and interim vice president for information technology. "This new supercomputer will allow hundreds of university faculty, staff, and students to pursue a broad range of research computing activities locally – such as multi-level simulations, big data analysis, and large-scale computations – that previously could only be run on national supercomputers," Dr. Wylie said.

Deepthought2 replaces the original Deepthought, installed in 2006. The new supercomputer, which is 10 times faster than its predecessor, can complete between 250 trillion and 300 trillion operations per second. It has a petabyte (1 million gigabytes) of storage and is connected by an InfiniBand network, a very high-speed internal network. Put another way, Deepthought2 is the equivalent of 10,000 laptops working together, it has 2,000 times the storage of an average laptop, and its internal network is 50 times faster than broadband.

"Supercomputers are increasingly being used in all areas of research, and computing resources that can sift through vast amounts of data at incredible speeds are becoming essential tools in expanding the frontiers of knowledge and in solving the urgent scientific and societal problems of our times," said Fran LoPresti, deputy CIO of cyberinfrastructure and research IT for the Division of Information Technology.

Ranked among the nation's top 25 public research universities, the University of Maryland has been awarded approximately $500 million annually in external research funding in recent years.

Based on current standings, Deepthought2 is expected to rank among the top high-performance computing clusters located at U.S. universities and among the top 500 clusters in the world. Supercomputers are qualified according to a standardized benchmarking test, and then they are ranked by the TOP500 Project.

"We are pleased to partner with the University of Maryland as institution leaders further their high-performance computing initiatives and continue to leverage technology to provide top-notch research and scholarly pursuits for faculty, students, and staff," said John Mullen, vice president and general manager, Dell Large Institution Sales.