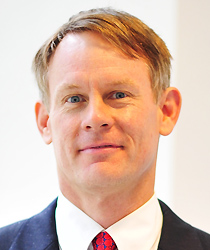 Worldwide aviation is growing at a fast pace, with many more planes in the sky expected over the coming decades. And that means an increased need to rein in emissions.

But how? The gas turbines used in today’s aircraft are already highly efficient, with little room for further optimization, so any solution will have to leverage newer technologies, such as electric propulsion and fuel cells.

A team led by UMD professors Christopher Cadou (AE) and Eric Wachsman (MSE) has its sights set on a breakthrough. With funding from ARPA-E and support from Raytheon and other industry partners, the team is developing a hybrid gas turbine/fuel cell system that can be used to power the large aircraft (like the Boeing 737) that are responsible for more than 85% of aviation emissions globally.

“Our approach is to marry a gas turbine with a new, ultra-high performance fuel cell to create a synergistic system whose overall performance is better than either component by itself,” Cadou said. “It’s a practical way to realize the improvements in overall efficiency (and thus reduced emissions) offered by electric propulsion without waiting for the needed improvements in hydrogen or battery technology.  Just as importantly, it’s a fuel-flexible solution that can be used with today’s fossil fuels as well as tomorrow’s carbon-neutral fuels.” 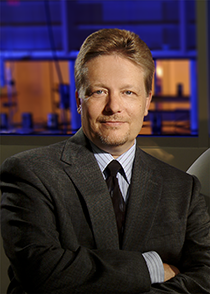 Gas turbines work by burning fuel with air to heat up pressurized gases, which are then expanded through a nozzle to produce thrust.  Relatively few components are required and thus power/weight and power/size are very large.  Fuel cells similarly oxidize fuel but do it electrochemically, directly producing the electricity that drives electric motors to produce thrust.  The fuel cell system has lower power/weight and power/size because it requires more components to work.  However, because of the direct electrochemical conversion of fuel to electricity, it is more efficient than a gas turbine.

“We have developed record high power density fuel cells that puts them closer to turbines, but with greater fuel efficiency for electric power production. This is a great opportunity to integrate the two technologies to achieve a hybrid solution that further advances the electrification of flight,” said Wachsman.

“In an aircraft, it’s all about weight and size,” Cadou said. “The bigger you are, the more drag you incur and the more fuel you need to burn to overcome it. That’s one of the reasons we’re not going to see a purely battery or fuel cell-powered vehicle at the scale of a 737. But if we put a fuel cell together with a gas turbine and electric propulsors, we get a workable compromise. The system becomes a little larger and heavier, but it gets a lot more efficient.  This means that the aircraft doesn’t have to carry as much fuel and emits fewer pollutants per cargo mile.”

The combination also makes sense from an operational perspective. Pilots sometimes need to adjust power quickly, for example by switching to takeoff/go around power. But fuel cells don’t easily respond to sudden changes, so a pilot confronted with a rapid-response situation might not be able to adjust the power in time. Adding the gas turbine provides the needed flexibility. On the other hand, during normal cruise conditions, power settings change very little, and the steady-state behavior of a fuel cell provides greater fuel efficiency.

The system being developed incorporates new fuel cell technology from Wachsman’s group that achieves unprecedented levels of power/size and durability.  It also incorporates regenerative use of electrical energy—that is, energy given up by the aircraft as it descends can be stored for use later instead of being dissipated into the air. The principle is familiar to anyone who has driven a Tesla: when braking, kinetic energy is fed back into the electric motor, conserving energy.

The four-year project, which also involves a research team from the Colorado School of Mines, will take place in two phases. During the initial two years, the team will design the system, model its performance characteristics, and show that it will meet the target performance specifications; in the subsequent, second phase, an actual prototype will be built and tested in a simulated flight cycle, taking advantage of the state-of-the-art facilities and resources available at UMD. Cadou’s focus will be on systems modelling, pressurized fuel cell testing and, later, manufacturing the full system; Wachsman, who directs the Maryland Energy Innovation Institute at UMD, will develop the fuel cell, working together with associate research professor Yi-Lin Huang and the students in the Wachsman group. The fuel cell group at the Colorado School of Mines will develop fuel cell reformer materials and architectures that will maximize the system’s power/weight and overall reliability.

In keeping with ARPA-E’s push for industry-transforming research, the team’s goal is to develop a commercially viable technology that could find itself way to the market within the decade. Given the urgency of the need for reduced emissions, Cadou anticipates that the UMD-led research may one day be considered a milestone.

“My metric for success is to be able to walk into the Smithsonian Air and Space Museum in 25 or 30 years and see a hybrid turbine/fuel cell on display as an example of state-of-the-art aircraft engine technology,” Cadou said.