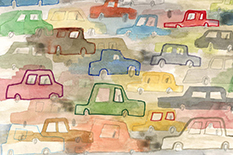 In a newly published commentary, Devon Payne-Sturges, assistant professor with the Maryland Institute of Applied Environmental Health, and others call for stronger vehicle fuel efficiency standards to protect children from the health risks of exposure to air pollution.
(Illustration by iStock)

Air pollution doesn’t just hurt children’s lungs—it impedes the development of their brains, too. New policy recommendations from a group including a UMD environmental health expert offer ways for federal, state and local governments to lessen this risk.

Exposure to air pollutants—especially burning fossil fuels—is linked to autism, ADHD, memory deficits and lowered intelligence in children. In a commentary in the American Journal of Public Health this month, Devon Payne-Sturges, assistant professor with the Maryland Institute of Applied Environmental Health and other members of Project TENDR (Targeting Environmental Neurodevelopmental Risks) call for federal action to strengthen vehicle fuel efficiency standards. Federal regulators should also take neurodevelopmental effects into account when determining the levels of air pollutants allowed by the Environmental Protection Agency, they said.

In addition, state and local governments should restrict existing and future sources of combustion-related emissions, rely on renewable energy sources for public transportation and build electric vehicle charging stations and other infrastructure to help individuals reduce their personal pollution levels, the researchers said.

“When there’s no action at the federal level, that doesn’t mean states can’t act on their own,” Payne-Sturges said. “We wanted to give examples of what states can do in light of this growing evidence for the neurodevelopmental effects of pollution.”

Reducing exposure to air pollutants is important for all populations, but particularly for low-income and minority communities, because they’re more likely to live close to pollution sources, according to the report.

“These conditions can have incredible costs not only to children and families but to society as a whole,” she said. “If we can equip ourselves with information on how to prevent these issues, we should do so.”