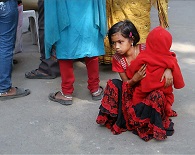 In a finding that may one day help control a major cause of death among children in developing countries, a team of researchers led by faculty from the University of Maryland, College Park and the University of Maryland School of Medicine has identified microorganisms that may trigger diarrheal disease and others that may protect against it. These microbes were not widely linked to the condition previously.

"We were able to identify interactions between microbiota that were not previously observed, and we think that some of those interactions may actually help prevent the onset of severe diarrhea," says O. Colin Stine, a professor of epidemiology and public health at the University of Maryland School of Medicine.

A much better understanding of these interactions is important, Stine adds, as they could lead to possible dietary interventions. Moderate to severe diarrhea (MSD) is a major cause of childhood mortality in developing countries and ranks as one of the top four causes of death among young children in sub-Saharan Africa and South Asia.

Stine and Mihai Pop, an associate professor of computer science at the University of Maryland, College Park led the six-year project funded by $10.1 million from the Bill & Melinda Gates Foundation. The research results are available in a paper published today in the journal Genome Biology.

The researchers used a technique called high-throughput 16S rRNA genomic sequencing to examine both "good" and "bad" microbiota -- the tens of trillions of microbes that inhabit the human intestinal system -- in samples taken from 992 children in Bangladesh, The Gambia, Kenya and Mali under the age of 5 who were suffering from MSD.

The researchers identified statistically significant disease associations with several organisms already implicated in diarrheal disease, such as members of the Escherichia/Shigella genus and Campylobacter jejuni. They also found that organisms not widely believed to cause the disease, including Streptococcus and Granulicatella, correlated with the condition in their study. In addition, the study revealed that the Prevotella genus and Lactobacillus ruminis may play a protective role against diarrhea.

The project is an offshoot of a $20 million study commissioned by the Gates Foundation in 2006. The Global Enterics Multicenter Study (GEMS) was launched in response to unanswered questions surrounding the burden and etiology of childhood diarrhea in developing countries.

GEMS collected troves of useful data on MSD, yet there were still some uncertainties, says Pop, who also has an appointment in the University of Maryland Institute for Advanced Computer Studies.

For example, in almost 50 percent of the children examined with diarrhea, the condition could not be attributed to a specific causal pathogen. The GEMS research also found numerous children carrying Shigella, which is known to cause problems, yet the children showed no signs of MSD.

The Gates Foundation contacted the two University of Maryland scientists in 2007, looking for new analyses of the GEMS data via a combination of computational biology, epidemiology and public health.

"New technologies have opened up new windows of discovery, so they asked us to look at the samples," says Pop, who adds that he and Stine expect to conduct further genomic and epidemiological studies to assess the potential development of diet- or microbiological-based therapeutics.

In addition to funding from the Bill & Melinda Gates Foundation, this study was also supported partly by the National Institutes of Health, the National Science Foundation and The Wellcome Trust.