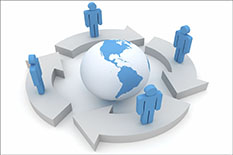 A new interdisciplinary study by University of Maryland researchers illustrates how countries with the greatest amounts of global wealth and highest consumption rates, led by the United States, are responsible for the greatest shares of global pollution.

The study identifies a country's position within the global trade network ("core" or "periphery"), and establishes their share of wealth and pollution along different global supply chains—core countries have larger shares of global wealth than global shares of pollution. The study shows how inequalities between nation-states can be shaped by patterns found within a global trade network. Countries that trade more are more central to the network. These core countries tend to acquire more benefits and to suffer less of the resulting pollution, leaving countries in the periphery with fewer options. This paper considers how such differences in trade patterns coincide with levels of pollution and wealth, as prompted by American consumerism.

The study, "The Economic Gains and Environmental Losses of U.S. Consumption: A World-Systems and Input-Output Approach," appears in a new issue of Social Forces. Authors Christina Prell of UMD's Department of Sociology and Kuishuang Feng, Laixiang Sun, Martha Geores, and Klaus Hubacek of UMD's Department of Geographical Sciences said the paper offers unique insight into the strong corollaries between economic and environmental inequality, as well as the impact of consumer behavior on environmental sustainability.

"One example of this phenomenon is when an American purchases an automobile, that purchase triggers an entire global supply chain of production. Along that global supply chain, jobs are created and pollution is generated. Thus, Americans' consumption behavior can prompt wealth and pollution levels in countries around the world," Prell said. The paper also closely examines examples of global production chains of clothing and associated distribution of wealth and pollution.

What's more, the researchers have found that those countries that experience greater shares of wealth as opposed to shares of pollution tend to be those countries that are central to the global trade network. Thus, American consumerism tends to reinforce the inequalities between nation-states that sociologists have long observed.

"Our findings also show the extent to which the United States "triggers" global inequalities in the world-system. This is potent stuff when thinking about issues of environmental justice, that is, who is responsible for pollution and who is most affected," Prell and her coauthors write.

Another key finding of the paper is China's status as the big outlier of this phenomenon—although it is very central in the trade network, in this study China resembles a more peripheral country in terms of its relatively high pollution to wealth ratio, meaning it gets more pollution for each unit of  wealth than other core countries.

"Given that many scholars and analysts are uncertain about China's future trajectory, our findings support the ambiguous, yet important, role China seems to play in the world economy," Hubacek said. "China has moved into the core in terms of its position of global trade network but hasn't managed to acquire many of the advantages that would come with such a core role. China's share of wealth is relative low compared to the high volume of pollution related to many of the global commodity chains due to a range of factors such as its relative inefficient production structure and high dependency of coal as well as the role global companies play in China, it essentially remains peripheral."

This is not the first time members of this research team have taken a cross-disciplinary examination of economic and environmental issues. Previously, Hubacek, Prell and Feng worked on a study with a researcher from a leading university in Spain that demonstrated which sectors could put the entire U.S. economy at risk when global oil production peaks ("Peak Oil").