Fischell Department of Bioengineering Assistant Professor Huang Chiao (Joe) Huang is working to harness the power of light to improve the efficacy of anticancer drugs used to treat pancreatic and ovarian cancers.

Most recently, Huang teamed up with Dana Marie Roque, M.D., of the University of Maryland School of Medicine, and Professor Tayyaba Hasan of the Wellman Center for Photomedicine at Harvard Medical School and Massachusetts General Hospital to explore new avenues for treating these and other cancers that are uniquely resistant to potentially lifesaving therapeutics. Huang was awarded a five-year, $3.3 million National Institutes of Health (NIH)/National Cancer Institute Research Project (R01) grant to support his efforts.

The five-year survival rates associated with many of the most commonly diagnosed cancers – including breast and prostate cancer – have steadily improved since the 1980s thanks to advances in science and medicine. Yet, that same benchmark for pancreatic cancer and advanced-stage ovarian cancer remains nearly as poor today as 40 years ago. Since 1985, the five-year survival rate has only inched up from 4 percent to 9 percent for pancreatic cancer patients, and from 40 percent to 48 percent for ovarian cancer patients, according to the American Cancer Society.

In the case of ovarian cancer, roughly 80 percent of patients have what’s known as platinum-resistant ovarian cancer – that is, cancer that responds at first to typical chemotherapy drugs, which contain the metal platinum, only to return within six months of treatment. 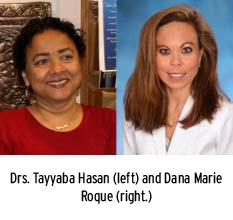 “Ovarian cancer patients with platinum-resistant disease have a paucity of therapeutic options,” said Roque. “It is devastating to inform a patient that she may have no better than a one in five chance of responding to our current armament of first-line treatments. The need for novel approaches is clear.”

As is the case with many aggressive cancers, in pancreatic and advanced-stage ovarian cancers, two factors often contribute to poor treatment outcomes.

First, some of the body’s transport proteins might work against the process of delivering anticancer drugs to cancer cells. These specialized proteins play a critical role in carting substances – such as water, ions, or even therapeutics – across biological membranes. But, when they actively pump anticancer drugs out of cancer cells, oncologists are left with few options for delivering therapeutics to specific targets in the body.

Second, cancer cells sometimes learn to repair the damage that anticancer drugs are designed to inflict. Typical anticancer drugs are considered cytotoxic, or toxic to living cells. They work by purposefully damaging DNA in order to stop otherwise uncontrolled tumor growth. But, in some cases, the body responds by ramping up production of a DNA repair enzyme known as tyrosyl-DNA phosphodiesterase 1. When this happens, the enzyme works against the cancer drugs by essentially repairing any damage done to cancer cells.

Different factors – such as poor drug influx or excessive efflux, activation of pro-survival pathways, and evasion of cell death – contribute to chemoresistance in cancer cells. Because of this, it is unlikely that a single treatment option could overcome this problem, according to Roque and Huang. Photodynamic therapy – and the repurposing of tetracycline antibiotics – presents a potential solution, according to Roque and Huang.

Recognizing this, Huang and his research team are developing a two-pronged approach to fight cancer drug resistance – and they are working with an unlikely weapon: light.

Huang and members of his Optical Therapeutics & Nanotechnology Lab are experts in what’s known as photodynamic priming (PDP) – a technique that involves light activation of molecules known as photosensitizers in order to photochemically alter nearby tissues or molecules without killing any cells. Previous studies have shown that PDP can “sensitize” cancer cells to chemotherapy, which would render chemotherapy more effective. It would also enable oncologists to scale back use of cytotoxic chemotherapy drugs that damage the body’s own healthy cells and contribute to unwanted side effects for the patient, such as hair loss, nausea, and increased risk of infection.

The group’s early results are promising. In a study performed in a mouse model of MIA PaCa-2, a human pancreatic cancer cell line, the research team found that PDP could, in fact, inhibit transport proteins and thus enhance drug retention in cancer cells by more than 50 percent. Even more, the researchers were able to dramatically reduce cancer metastasis – or spread – in mouse models of MIA PaCA-2 pancreatic tumors.

Along with applying PDP, the researchers would use specialized antibiotics to inhibit DNA damage repair that would otherwise undo progress made by anticancer drugs.

“The beauty and significance of this approach is that it repurposes tetracycline antibiotics – which are typically used to treat bacterial infections – not for antimicrobial treatment, but for enabling a well-known but highly toxic chemotherapy drug at a much lower concentration,” Hasan said. “This increases drug tolerability while maintaining or improving efficacy. If successful, this provides a platform for employing many such combinations of approved, toxicity-tested molecules from totally different realms of applications to cancer therapeutics with reduced adverse side effects. The implications are huge both in terms of health and reducing the economic burden of cancer treatment.”

PDP could not only disrupt transport proteins that play a role in pumping drugs out of the cancer cells, but also permeabilize tumor vasculature and alleviate tumor desmoplasia – the growth of fibrous tissue around disease – to improve drug penetration in tumor tissues, according to Huang. “By controlling timing and location of PDP, this single approach can be used to target multiple barriers to drug delivery in solid tumors at once,” he said.