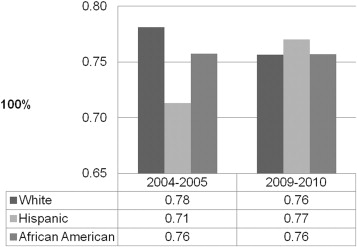 Percentage of women with a mammogram before and during the Great Recession
COLLEGE PARK, Md. – American women were less likely to receive a mammogram or Pap smear during the Great Recession of 2007-2009 than they were five years earlier, according to a study by researchers at the University of Maryland School of Public Health. The nationwide decline in screening rates was most pronounced among white women.

"Economic recessions lead to unemployment, loss of health insurance, and loss of income, which can have a negative impact on preventive services such as cancer screening," said Dr. Christopher King, lecturer in the department of health services administration and the study's lead author. "We found a reduction in breast and cervical cancer screenings during the Great Recession, and there were noteworthy differences by race and ethnicity. Screening rates among white women fell, which is not surprising since about three million whites lost insurance coverage during the recession, but rates among African American women stayed about the same and rates among Hispanic women actually improved."

Among Hispanics, the 6 percent increase in breast screening and 3 percent increase in cervical screening between the two time periods are moving the group closer to national targets. The study authors credited screening efforts funded by the National Breast and Cervical Cancer Early Detection Programs and awareness activities by philanthropies such as the Avon Foundation and the Susan B. Komen Foundation for the improvement.

The study also found differences in screening by U.S. region. "Consistent with U.S. regions most impacted by unemployment and uninsurance during the recession, breast screening in the Midwest and South was lowest, followed by the West," the authors write. "The Northeast fared better, mainly because of more widespread public insurance programs with high eligibility thresholds."

The paper notes that early detection for breast and cervical cancer can significantly reduce mortality rates and health costs.

"If the U.S. is going to meet its breast and cervical cancer screening goals for Healthy People 2020, we have to re-engage women who did not receive preventive health services during the recession," said Dr. King. "As the Affordable Care Act takes effect, local and national efforts are needed to reach out to demographic populations most affected during the recession and help them understand the law and how it can help them receive timely preventive care."

*"Breast and cervical screening by race/ethnicity: comparative analyses before and during the Great Recession" was written by Christopher J. King, Jie Chen, Mary A. Garza, and Stephen B. Thomas.