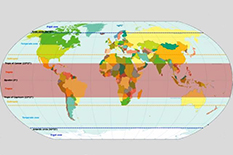 Climate change is already resulting in increases in the number and strength of extreme weather and climate events such as heat waves, droughts and flooding. Now a new UMD-led study finds that in tropical regions of the globe exposure to extremes of heat and precipitation during prenatal and early childhood years could make it harder for children to attain secondary school education, even when they live in better-off households.

University of Maryland researcher Heather Randell, lead author of the study, and co-author Clark Gray, of the University of North Carolina at Chapel Hill, found that climatic conditions can affect education attainment in tropical countries in multiple ways. In Southeast Asia—a region that historically has high heat and humidity—exposure to higher-than-average temperatures during prenatal and early childhood has a harmful effect on schooling and is associated with fewer years of attending school.  In West and Central Africa, and Southeast Asia, lower rainfall in early life is associated with lower levels of education and higher rainfall with higher levels. And in Central America and the Caribbean, children who experienced higher than typical rainfall had the lowest predicted education.

“If climate change undermines educational attainment, this may have a compounding effect on underdevelopment that over time magnifies the direct impacts of climate change,” the authors write in the study, which was published in the April 15, 2019, issue of the journal Proceedings of the National Academy of Sciences (PNAS).  “As the effects of climate change intensify, children in the tropics will face additional barriers to education.”

Randell conducted the synthesis study as a postdoctoral fellow at the University of Maryland's National Socio-Environmental Synthesis Center in Annapolis. She and Gray investigated the links between extreme temperature and precipitation in early life and educational attainment in 29 countries in the global tropics. These results suggest an additional way climate change could undermine gains in socioeconomic development, particularly among the world’s most vulnerable populations; and the researchers say their work has implications for determining vulnerability to climate change and development trajectories.

“While these results may not be directly related to schools, they are important factors in early life that affect a kid’s school trajectory,” said Randell. “People rarely think about how kids’ education is directly linked to climate. But this is really important given the extent that climate change is impacting extreme weather events.

Although the authors expected that children from better educated households would fare better, they found instead that, even for better-off households in the tropics, climate change could erode development and education gains.

Randell and Gray’s PNAS paper builds on their earlier study published in 2016 in Global Environmental Change that found how climate variability competes with schooling in Ethiopia and could lower adaptive capacity for generations.