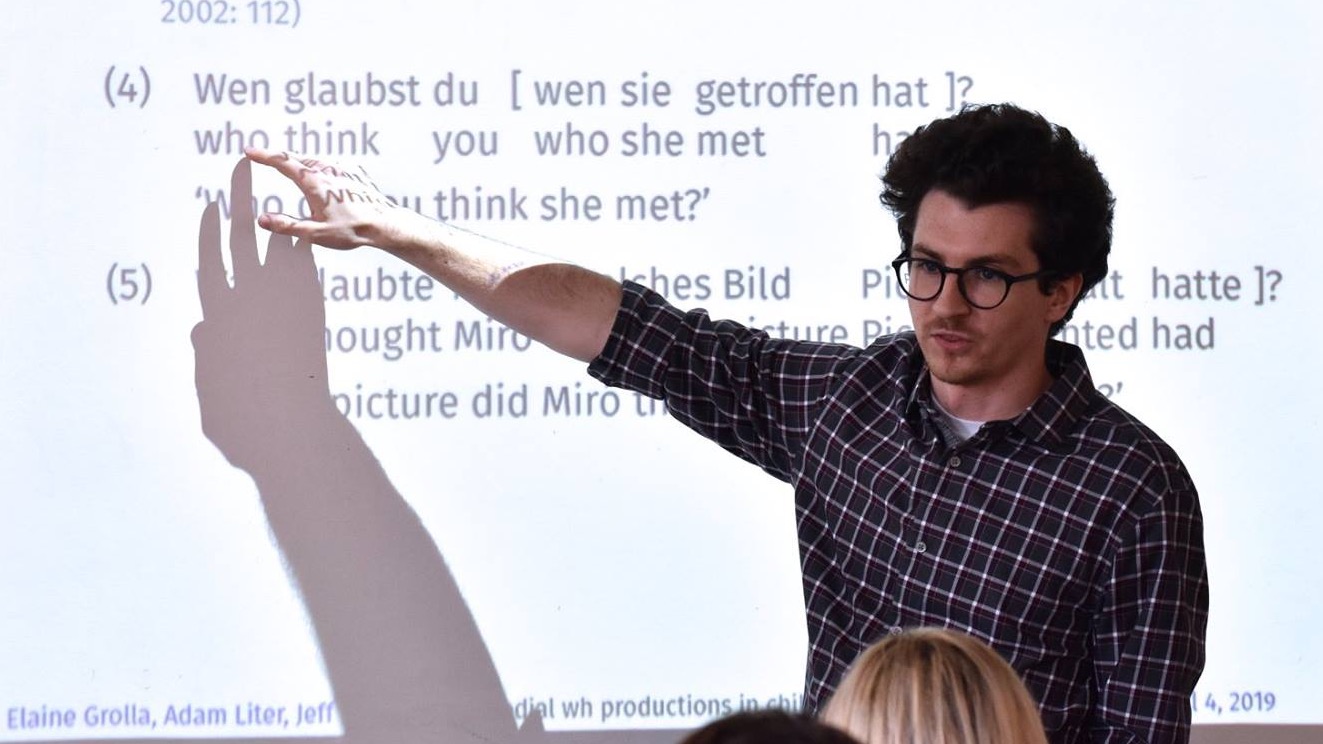 Congratulations to Adam Liter and to Maria Polinsky, whose work has earned new support from the National Science Foundation. Adam has received a Doctoral Dissertation Research Improvement Grant for work with his supervisor, Jeff Lidz, on “Subjacency, the Empty Category Principle, and the nature of constraints on phrase movement.” Masha is the recipient of a Collaborative Research Award on “Variation in exceptive structures,” on how languages express thoughts like ‘everybody laughed except you,' a project on which Hisao Kurokami has already begun to work. See the abstracts below.

Adam Liter and Jeffrey Lidz, BCS #2116270, Subjacency, the Empty Category Principle, and the nature of constraints on phrase movement

In general, it is possible to form a question by 'moving' a wh-phrase like "who” or "which boy" out of a seemingly arbitrary number of clauses, as in "Who did Allie say that Amy saw?", "Who did Alicia hear that Allie said that Amy saw?", and so on. In these questions, "who" is the logical object of "saw" yet appears at the beginning of the sentence. However, there are certain syntactic environments, commonly called 'islands,' in which question formation is not possible. A question like "Who did the book by delight everyone?"--whose intended meaning is 'who is the person such that the book by that person delighted everyone'--sounds unnatural to speakers of English, suggesting that it is not a possible question despite having a reasonable meaning. Some linguists have claimed that these constraints disappear when the offending structure is elided, such as in a sentence like "Amy said that the book by someone delighted everyone, but I don't remember who". Such sentences sound a bit more natural to speakers of English, but their status isn't entirely clear. This dissertation project will advance linguistic theory by using recent experimental techniques to ascertain whether such sentences are grammatical. In advancing the field, this project will also support education and diversity by training an undergraduate research assistant in these experimental techniques, scientific thinking, and statistical analysis.

Using behavioral methods, this doctoral dissertation project probes the link between speakers' reported judgments and their sensitivity to structure in questions with and without ellipsis. The goal is to determine whether the same principles apply to dependencies involving ellipsis as those that do not, with the longer term goal of identifying the computational principles governing syntactic locality. More generally, the project addresses the consequences of mismatches between reported acceptability and subliminal sensitivity to structure in acceptability judgments.

All languages are able to express universal statements, even though we realize that they are seldom literally true. Consequently, languages also have means of expressing exceptions to such generalizations, via exceptive constructions. English examples include "Everybody but Sandy laughed" and "Everybody laughed except Sandy". Linguistic means of expressing exclusion have received modest attention from philosophers of language and semanticists, whose focus has been primarily on English. Beyond that small body of work, little is known about exceptive constructions across the world's languages: how they are built, what their distribution is within individual languages and across languages, and how they compare to other constructions expressing comparison or contrast. This research project fills this gap as the first cross-linguistic investigation of lexical, morphological, and syntactic properties of the construction. Understanding exceptive constructions allows linguists to create better theories of language structure and to predict the range of variation in natural languages; it helps computer scientists build better parsing models; it gives language educators new dimensions that should be emphasized in language teaching, and it provides cultural anthropologists with additional tools to study societal (dis)similarities in the concept of exclusion.

This research project employs methodologies from linguistic typology, theoretical syntax, and formal semantics to carry out in-depth investigations of exceptive constructions in a wide range of the world's languages. The project aims for maximum linguistic coverage by using sampling techniques of modern linguistic typology. Theoretically, the project addresses a range of questions that arise from the empirical findings. In particular, it analyzes the contrast between free and connected exceptives, phrasal and clausal exceptives, and coordinated and subordinated exceptives. The project develops diagnostics that reliably identify the different types of exceptives and identifies independent linguistic properties that correlate with these different types of exceptives in a language. Therefore, it allows researchers to predict the type of exceptive constructions in an individual language. Beyond developing a picture of exceptive structure cross-linguistically, the project has notable implications for current theories of ellipsis. The project provides data on low-resource and endangered languages and highlights the importance of linguistic diversity for a complete understanding of the human language system.