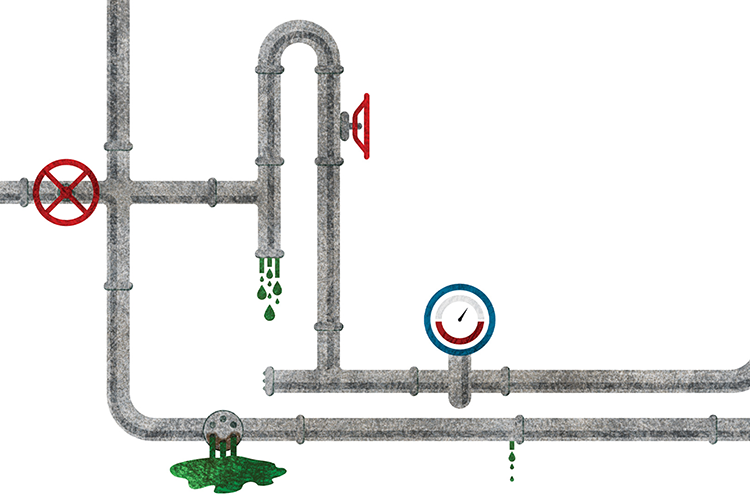 To address sanitary sewer overflows, Hendricks is working to provide a case study and roadmap for urban centers across the country dealing with antiquated infrastructure and storms strengthened by climate change.

The map on the Baltimore City Department of Public Works website looks sterile, but the problem it illustrates is most definitely not.

Colored dots peppered across the graphic show locations of sanitary sewer overflows, the wastewater that spills in homes, streets, or the environment due to a pipe break or blockage, ranging from the small and mop-able to the overwhelming in odor and damage.

An estimated 1,440 gallons of raw sewage reportedly spread on Canterbury Road near Hampden in February; 540 gallons spilled on North Hilton Street near Gwynns Falls Park in March; and 2,370 gallons leaked on Kane Street east of Bayview in May.

Marccus Hendricks, assistant professor in the School of Architecture, Planning and Preservation and affiliate of the Clark School’s Center for Disaster Resilience, is filling in the stories behind those incident reports. The goal is to provide a case study and roadmap for urban centers across the country dealing with antiquated infrastructure and storms strengthened by climate change.

“A lot of these issues are exacerbated by more frequent and intense wet weather events,” Hendricks said. “It’s a pervasive issue and only the beginning of what we can expect to see.”

The overflows are hardly new in Baltimore—the city has been under a consent decree with state and local authorities since 2002 to fix the problems; Hendricks said Baltimore averages 6,000 backups annually.

It’s a cascading and stomach-turning mess that can wipe out a family’s possessions before contaminating streets and public places. A city reimbursement program has struggled to keep up with demand, although Baltimore public works officials say they have doubled the payout to $5,000 and note the overflows do not affect the city’s drinking water supply.

But while the problem itself is citywide, said Carmela Thomas-Wilhite, Baltimore program manager for the Chesapeake Bay Foundation, the ability to clean up varies from person to person. “It’s an environmental justice issue,” she said. “Everything is connected.”

A specialist in stormwater impacts on infrastructure, Hendricks started the project after he was chosen in 2018 as a JPB Environmental Fellow by Harvard University’s T.H. Chan School of Public Health. He’s been analyzing overflow data and conducting interviews with everyone from homeowners to Environmental Protection Agency officials.

Thomas-Wilhite believes Hendricks’s research could be another part of the effort in fixing an urgent city problem.

“It takes a group of people to create change within this city,” she said. “His research is really just holding them accountable to do the right thing.”