Study: Criminal Penalties for Drug Use During Pregnancy Deter Women From Treatment

Study: Criminal Penalties for Drug Use During Pregnancy Deter Women From Treatment 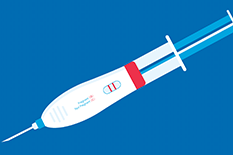 State policies that rely only on treatment programs or on criminal penalties to help get pregnant women who use drugs into rehabilitation aren't as effective as those that use multiple approaches, according to new research from UMD's School of Public Health.

The study, published in the journal Addictive Behaviors, explored state-level, prenatal substance-use policies and how they impacted the likelihood that pregnant women were admitted for substance abuse treatment. They found that states with a combination of treatment and support, clinician-reporting requirements and criminal justice measures were most successful at getting women into treatment.

Health economist Mir M. Ali, doctoral candidate Priscilla Novak and associate professor Jie Chen, all in the Department of Health Services Administration, worked with colleagues at the University of Minnesota and RTI International to analyze a dataset of millions of admissions to substance treatment centers nationwide between 2002 and 2014.

The study found that states such as Alabama with prenatal drug-use policies that focused only on criminal punishment were the least likely to admit women for drug treatment programs. States like Maryland and Virginia that have adopted prenatal substance use policies that take a multifaceted, comprehensive approach had the highest use of substance-use disorder treatment by pregnant women.

“This approach may facilitate more open communication around substance use and dependence between women and their healthcare providers,” Novak said. “It may be that in states where there is criminalization but not treatment, women are more likely to withhold substance use information from their provider.”

On their own, criminal measures can discourage women from seeking medical help, and women in at least 45 states have faced criminal charges for drug use during pregnancy, ProPublica reports.

But when coupled with other policies, criminal penalties can motivate doctors to refer women to services and help ensure that pregnant women with substance use disorder enter treatment, Novak said.

Women who abuse substances during pregnancy are in danger of extended hospitalization, illness, violence and death, and their newborns often experience poor birth outcomes and chronic health conditions, while babies born to mothers who abuse drugs may experience neonatal withdrawal syndrome.

The study’s findings highlight the role of state policy in health outcomes for women and their children and have significant implications for lawmakers and officials looking to craft public policies that safeguard health.

“For states that currently have no policy, the evidence would suggest that a comprehensive policy is superior in terms of getting substance using women into treatment,” Novak said.