Toxic Pesticides on the Rise in Our Food

Toxic Pesticides on the Rise in Our Food 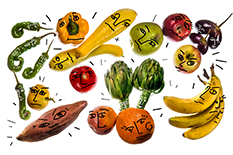 There might be more to a cherry than juicy sweetness, and the wholesome crunch of raw cauliflower is probably covering up something far less healthy, according to new University of Maryland research into a little studied but widely used type of toxic insecticides in the U.S. food supply.

In a paper published last month in the journal Environmental Health, researchers from the School of Public health analyzed U.S. Department of Agriculture monitoring data from 1999 to 2015 on the prevalence of neonicotinoids—the most widespread class of pesticides in the world—in fruits, vegetables, meats, dairy products and even baby food.

One pesticide, acetamiprid, was detected on 46 percent of cherries tested, 30 percent of apples and 21 percent of strawberries. Meanwhile, about 58 percent of cauliflower that was tested showed positive for imidacloprid, the world’s No. 1 agricultural insecticide, along with 46 percent of lettuce and 31 percent of cilantro. Commodities marketed as organic were far less likely to have pesticide residues, but still had a 6 percent detection frequency.

Averaged over the 16-year monitoring period, 4.5 percent of food commodities had detectible levels of the insecticides, and the researchers said that increasing rates of detection of the chemicals in recent years indicates their use is rising.

While the pesticide residue levels for most commodities were well below Environmental Protection Agency standards, the findings nevertheless raise concern about potential developmental and neurological effects of cumulative exposure, the researchers said.

And they’re hard to avoid. Unlike some other widely used pesticides, neonicotinoids are systemic, meaning they are taken in by the plant, said Devon Payne-Sturges, assistant professor of applied environmental health and senior author of the study.

“It’s not on the plant—it’s in the plant stem, inside the leaf, the fruit, the pollen,” she said. “So you can’t simply wash off the residue, because it’s inside the flesh of the plant.”

It’s possible to minimize exposure by eating organic, but any overarching solution will have to be societal, dealing broadly with how neonicotinoids are used, Payne-Sturges said.

Concerns about the class of insecticides first emerged after they were observed harming bees and other pollinators. Newer research indicates potential human health risks as well, Payne-Sturges said, and they’re now being found in water supplies and in soil samples, raising questions about the chemicals’ ability to spread and persist throughout the environment.

Little research exists on the extent of neonicotinoid residue in U.S. food, and the researchers say this is the first study focused on the detection trends of seven neonicotinoids covering the entire period since 1999, when the USDA began testing for their presence in food.

Lindsay Huth contributed to this report.