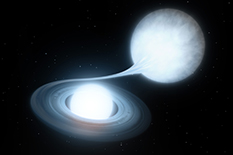 An artist’s interpretation shows one star in a binary system beginning to strip material from its partner. The Zwicky Transient Facility (ZTF) is well-suited to detect binary star systems.
(Illustration courtesy of Caltech)

Through a backyard telescope, the night sky seems static once you look past the movements of the moon and planets—but there’s actually plenty going on in the depths of space.

A new automated sky survey designed to spot sudden changes in the sky—ranging from local space-rock flybys to distant detonations and the destruction of stars by black holes—recently produced its first crop of results, with seven papers based on observations from the Zwicky Transient Facility (ZTF) accepted by the Publications of the Astronomical Society of the Pacific.

ZTF is based at Caltech’s Palomar Observatory near San Diego, and University of Maryland partners made important contributions to the planning, design and science operations of the survey project. UMD participation in ZTF is facilitated by the Joint Space-Science Institute, a partnership between UMD and NASA’s Goddard Space Flight Center.

Since officially beginning operations in March 2018, the new instrument has discovered 50 small near-Earth asteroids and more than 1,100 supernovae, while observing more than 1 billion stars in the Milky Way galaxy.

Every night, ZTF’s camera uses the 48-inch Samuel Oschin Telescope to survey the Northern skies for anything that explodes, moves or changes in brightness—collectively known as transients. Because the ZTF camera covers 240 times the size of the full moon in a single image—which makes it capable of surveying the entire Northern sky every three days—it’s discovering cosmic events that were impossible to catch before now.

“With the ZTF Northern Sky Survey, we are conducting a systematic study of transients in the nuclei of galaxies, allowing us to catch stars in the act of being ripped apart by supermassive black holes and capture active galactic nuclei ‘turning on’ from a previously quiescent state,” said Suvi Gezari, an assistant professor of astronomy at UMD and a fellow of the Joint Space-Science Institute whose research focuses on time-domain astronomy. “We expect to yield enough of these events in the three-year survey to transform our understanding of accretion onto supermassive black holes lurking in the centers of galaxies.”

The cost to develop and run ZTF is about $24 million, with about $11 million from the U.S. government via the National Science Foundation (NSF) and the rest from an international collaboration of partners that includes UMD. Additional support comes from the Heising-Simons Foundation.

Because the U.S. government pays nearly half the cost, many of its observations are shared publicly in near-real time with the astronomy community. When ZTF detects a transient object, the system activates an automated alert system, sending notices to astronomers who quickly follow up on notable objects using other telescopes. An NSF-funded program called the Global Relay of Observatories Watching Transients Happen(GROWTH) rallies 18 international observatories located in the Northern Hemisphere to follow up on ZTF alerts.

“It takes only 10 to 20 minutes from the time a transient observation is made to the time the alert goes out,” said Matthew Graham, the ZTF project scientist at Caltech, who specializes in handling and processing large streams of astronomical data. “It’s like running a major newsroom. We’ve never operated at this scale before, and handling all the data is quite a feat.”

This article is based on a release originally provided by Caltech.