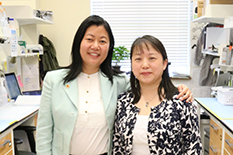 A casual stroll through the cosmetics department of the nearest convenience store reveals an overwhelming plethora of skin care products marketed to reverse or halt the effects of aging. Yet despite the claims of the products’ effectiveness, a reliable, comprehensive, standardized and cost-effective method of testing these claims has not yet been introduced.

Harnessing the opportunities presented by 3-D bioprinting technology, Associate Professor Kan Cao from the University of Maryland Department of Cell Biology and Molecular Genetics has invented a new platform to test the anti-aging properties of cosmetics and provide consumers with reliable data on these products. Assistant Research Professor Zheng-Mei Xiong, also of the Department of Cell Biology and Molecular Genetics, contributed to its development.

“We have developed a systematic analysis platform, using a 3-D reconstructed human dermis, to evaluate the function of active compounds in anti-aging skin care products,” said Cao. “The compounds can be tested individually or in combination. This platform is streamlined, quantitative, and reliable, providing a multidimensional measure of the anti-aging potential of the tested compounds.”

The platform is capable of measuring information about aging skin cells such as biomarkers, cell proliferation, damage caused by free radicals, and more. The team’s invention is unique in that it tests cosmetic ingredients’ anti-aging properties on 3-D bioprinted skin, as opposed to using animals. Using a step-by-step process to test the anti-aging skin care products, the research team has developed a unique approach based on years of experience in the field.

“Traditional methods for testing cosmetic ingredients involve the use of live animals and are time consuming and costly,” said Cao. “Furthermore, the animal-based skin test is highly variable and generally a poor predictor of human skin reactions. Thanks to 3-D bioprinting technology, reconstructed human dermis is becoming readily available at a relatively low cost.”

“The process of testing these anti-aging compounds in 2-D is easy,” said Cao. “We soak the cells in a dish. Then we use the standard media cultured in the skin cells and add the anti-aging compound of interest with the medium. We test multiple concentrations over the course of two weeks, and analyze toxicity and skin irritation. In short, we are able to gauge the cell’s response to the compound. Typically for the anti-aging effect, we check after about two weeks of incubation, three times a week.”

Looking to the future, the team hopes that the platform will become a standard in the booming cosmetic industry, which accounts for $56.3 billion in revenue in the U.S., according to Statista.

"Currently, there is no standard analysis to provide consumers with reliable data on the anti-aging potential of cosmetic products," says Cao. "This invention aims to solve this problem. My dream is that someday this platform may even be used to predict skin age.”

The team’s research was supported by the Maryland Innovation Initiative and the UMD Startup Fund.

UMD’s Office of Technology Commercialization has nominated the team’s platform for the Invention of the Year award in the Life Sciences category. The winners of the award will be announced at the Innovate Maryland: Celebrating Innovation and Partnerships event on April 12, which is part of the University of Maryland’s “30 Days of EnTERPreneurship.”