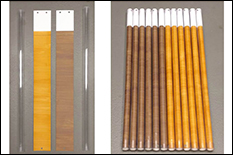 Rabenhorst uses iron oxide paint applied to semi-flexible films (left) to collect information about wetlands soil. The films are rolled into tubes (right), then inserted into the ground.

Wetlands are among the most diverse ecosystems in the world, providing homes for a vast variety of plants and animals and playing other important roles in the environment, such as flood prevention, water purification, and reducing carbon emissions to the atmosphere. However, wetlands are also among the most endangered ecosystems with more than 50 percent of wetlands in the United States and 70 percent in Maryland already lost. Identifying and preserving remaining wetlands is one of the highest priority issues environmental scientists are tackling, but collecting adequate and reliable data about wetlands is not an easy task.

Martin Rabenhorst, professor in the Department of Environmental Science and Technology at the University of Maryland’s College of Agriculture and Natural Resources, has invented a method for measuring soil properties in suspected wetlands to verify that they are, in fact, wetlands and to confirm whether the soil processes that make wetlands beneficial to the environment are having their intended effect.

The current method for analyzing soil uses a technology called IRIS, short for “indicator of reduction in soils,” in which PVC pipes coated with an iron oxide paint are pushed into the ground and left for approximately a month before being removed and analyzed. During the time that the tube is left in the ground, microbes react with the iron paint, dissolving it. If at least 30 percent of the paint has been removed in the majority of the samples, the soil meets technical standards to be defined as a wetland.

The difficulty, however, comes from measuring how much paint has been dissolved from the tube.

“When the IRIS method first began being used, we’d simply estimate the percentage of paint that had dissolved, a rather non-scientific approach with a large margin for error,” said Rabenhorst. The most accurate method involved laying a Mylar grid over the tube and counting the number of squares under which the paint has dissolved. However, this is enormously time consuming and inefficient.

Additionally, the paint on the outside of the tubes is not protected and is easily scratched during transport and insertion into the soil, affecting the results of the analysis. The tubes are awkward to transport and take up a lot of space, and they cannot be recycled or reused.

“I have two large trash bins with over 300 used tubes in the corner of my lab, and I can’t do anything with them,” said Rabenhorst. Over the last 10 years, he’s made and used close to 5,000 tubes. “This is a major sustainability issue that all IRIS technology users encounter.”

To address these issues, Rabenhorst developed a new method of deploying IRIS technology. Instead of being painted onto tubes, the iron oxide paint is applied to thin, semi-flexible films. The films are inserted into the ground using a tube with holes at each end, but the same tube can be used over and over again, significantly reducing the environmental impact that previous IRIS technology deployment methods have struggled to overcome. The films also can be packed into boxes and transported easily and with no risk of damage, and the new insertion method prevents the paint from being scraped off by anything other than the microbes intended to react to the paint. Finally, since the paint is applied to a flat surface rather than to cylindrical tubes, it is possible to easily photograph or scan the films and analyze the films digitally, a far more efficient and effective method than counting individual squares on a grid.

Rabenhorst plans to commercialize the technology and is currently exploring establishing a startup company, which he hopes to launch later this year.

The “Improved Wetlands Soil Assessment Utilizing Oxide-Coated Plastic Films” has been nominated for the Invention of the Year Award in the physical sciences category, for which the winners will be announced at the 2018 Innovate Maryland celebration on April 11.