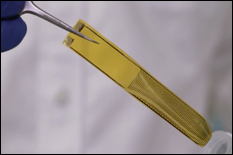 According to a 2015 report by the Centers for Disease Control and Prevention (CDC), urinary tract infections (UTIs) are the most commonly reported healthcare-associated infection, and 75 percent of UTIs acquired by hospitalized patients involve the use of a catheter. Approximately 15-25 percent of people who are hospitalized receive catheters during their stay. While catheters are a necessary and important tool, catheter-associated UTIs can potentially prolong hospital stays and lead to worsened health.

Catheter-associated UTIs develop when bacterial biofilms form on the surface of an indwelling catheter. The bacteria enter the urinary tract through the catheter tube, in turn, infecting the patient. High doses of antibiotics are required to combat bacterial biofilms, which leads to an increase in antibiotic-resistant strains of bacteria.

University of Maryland researchers have tackled this problem head-on by inventing a catheter insert that can detect and prevent bacteria biofilm formation in real-time. It is a biofilm sensing and treatment microsystem for urinary catheters that combines biofilm sensing and the bioelectric effect treatment in a flexible cylindrical tube. The device is rolled and inserted inside the catheter, where its microfabricated polymeric substrate and electrodes seamlessly conform to the catheter’s surface. If biofilm begins to form on the film, the electrical properties of the electrode will change, alerting caretakers. The electrodes also emit a low electrical field that combats the formation of biofilms and treats them when combined with a low dose of antibiotics.

Previous research has proven that electrodes can be effective in detecting the formation of microfilms and that electrical fields in combination with antibiotics – the bioelectric effect – can treat them, but the team’s invention is the first attempt to unify these discoveries in a tool that can be deployed to detect, prevent, and treat bacterial infections.

“This invention has the potential to reduce the burden of biofilm-based UTIs in hospitals and on other kinds of biofilm-susceptible surfaces, such as in water systems and food production facilities,” said Ryan Huiszoon, Ph.D. student in the Fischell Department of Bioengineering and one of the inventors. “This approach could potentially lessen the impact of antibiotic resistance and help slow its spread.

The “Flexible Urinary Catheter Insert to Detect and Prevent Bacterial Infections” was invented by researchers at the A. James Clark School of Engineering: Huiszoon; Pradeep Rajasekaran, post-doctoral researcher with the Institute for Systems Research (ISR); and Reza Ghodssi, Herbert Rabin Distinguished Chair in Engineering in the Department of Electrical and Computer Engineering and ISR. William E. Bentley, Robert E. Fischell Distinguished Professor and Director of Robert E. Fischell Institute for Biomedical Devices, served as a collaborator on the project.

The team intends to commercialize the technology and is conducting additional testing and incorporating wireless control features before taking it to market.

The research was initially funded by the Robert W. Deutsch Foundation.

The “Flexible Urinary Catheter Inserts to Detect and Prevent Bacterial Infections” has been nominated for the Invention of the Year award in the life sciences category, for which the winners will be announced at the 2018 Innovate Maryland celebration on April 11.

For more information about the team’s research and invention, visit: http://www.umdmsal.com/