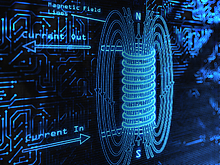 A team of researchers from the University of Maryland has received funding from the Army Research Laboratory(link is external) (ARL) to develop innovative computational methods that can simulate the effect of low-frequency electromagnetic fields on human organs.

Ramani Duraiswami, a professor of computer science with an appointment in the University of Maryland Institute for Advanced Computer Science (UMIACS), and Nail Gumerov, a senior research scientist in UMIACS, are co-principal investigators of the $1.2M award.

While the effects of electromagnetic fields on biological tissues have already been studied by others, the UMD team has come up with new ideas that combine mathematical approximations on macro-, micro- and nanoscale levels, scalable algorithms, and high-performance computing approaches in order to provide more detailed data using complex simulations.

There are many possible uses for these types of simulations, Duraiswami says.

“There are many sources of electromagnetic fields in today’s world, including generators, various machinery, power lines, microgrids, communication devices and experimental equipment,” he says. “It is critical to provide reliable information on the safety of people working around, or present in, such environments. Robust modeling and computational simulations are one of the keys for working out safety standards.”

Duraiswami and Gumerov recently completed the first part of the cooperative research and development agreement funded by the ARL.

During that portion of the project, they developed a number of computational techniques for the efficient simulation of low-frequency electromagnetic fields, including those generated by power lines. The team’s methods were then scaled up and demonstrated using U.S. Army supercomputers.

“The approaches we developed to simulate eddy currents in poor conductors appear to be very appropriate for the modeling of electric fields in various biological tissues and cellular structures,” Duraiswami says. “This encouraged us to propose the second part for the cooperative research. Of course, we understand that biological systems are extremely complex, but we are optimistic our approaches will allow for modeling the phenomena arising at multiple scales.”

Assisted by Jeremy Hu, a first-year computer science doctoral student at UMD, the researchers are going to develop new approaches, which include advanced meshing and boundary integral equation techniques for the solution of reduced Maxwell equations in the domains of complex geometry and topology. Fast multipole methods and improved sparse matrix solvers will be among the algorithmic accelerators the team proposes to use.

“If a foreign adversary were to produce a weapon that emitted large amounts of electromagnetic waves, we would want to be able to understand how that would affect the human body,” he says. “However, at this point we are interested with fundamentals, which can be used for building adequate computational capabilities.”

Duraiswami says his research team plans to eventually collaborate with biologists at UMD to make measurements of electromagnetic fields on biological systems, such as those of mice, worms or other animals.