"We Are Not Ready"

"We Are Not Ready" 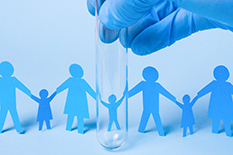 If the researcher in China who announced this week that he had created HIV-immune twin newborn girls through gene editing expected a pat on the back, he must have been disappointed.

Reactions ranged from disbelief to outrage, with the co-inventor of CRISPR-Cas9, a technology that lets scientists manipulate DNA, calling the project "disturbing and inappropriate."

Bhanu Telugu, a UMD associate professor of animal and avian sciences who uses CRISPR in his own research, said the technology may one day be put to use to cure human diseases, along with those of our livestock and pets. But that's a long way off, and many ethical and safety issues must be untangled before we can start editing babies' genes in good conscience, he told Maryland Today.

So what is CRISPR, anyway?
It's a system in bacteria that functions as an adaptive immune system against incoming viruses called bacteriophages. But in layman's terms, they are enzymes that cut DNA, the building blocks of all life forms on earth. So now that we've found that, we have a "molecular scissors" that can be targeted to a specific region within the genome. We can now use it to cut pretty much any DNA in any life form, and either modify the DNA at that site or render that gene functionless.

How is your lab using it?
We are using it for basic discovery, as one of the most powerful tools to study gene function. If you want to study what a gene does, you either increase the number of copies—or upregulate it—or you make it functionless. In our laboratory, we were using it in mouse models to understand developmental biology, and in pig models for agricultural and biomedical applications. To put it more relevantly, we're using it for disease resilience traits, and improving animal welfare traits. On the biomedical side, we're generating models for human diseases like flu.

So we can expect good things to come from gene editing?
Yes. For instance, we are collaborating with an animal genetics company to modify a gene that can make animals resistant to PRRS, which is the most economically important disease in the pig industry. Focusing on disease resilience, we can use these techniques to improve animal lives and human lives as well.

The scientist who edited the genes of the twin baby girls said he was doing that by making them immune to HIV. What did you think when you heard the news?
I was appalled. Many of these promising genetic technologies have been laid waste because somebody has gone forward with a premature experiment. So while good outcomes are possible when using this in humans, we are not ready. We don't fully understand the level of destruction that can happen in the genome when we introduce this tool. This is too soon for a safe human study.

Where's the ethical line between what's okay and not with gene editing?
The National Academy of Sciences has good guidance. They're not against human gene editing in principle, but it has to be done under strict ethical guidelines. For instance, the target needs to be a disease that cannot be corrected by traditional means. So while this candidate gene edited by the Chinese scientist might sound good in theory, I don't think it's a good target because we have other ways to treat HIV. Maybe you can cure it. On the flipside, we have no idea what happens in these offspring that were edited with CRISPRs. If something totally detrimental happened to them because of this technique, it will exemplify the nightmare scenario we have been worried about ever since this technology came into play.