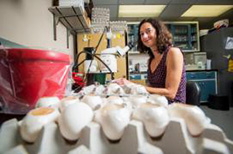 Lisa Taneyhill, Ph.D., an assistant professor in the Department of Animal and Avian Sciences at the University of Maryland, has been awarded a $1.9 million research grant from the National Institute of Dental and Craniofacial Research at the National Institutes of Health (NIH). Using chick embryos, Taneyhill and her colleagues will try to uncover how two different cell types migrate and adhere to each other to form the cranial ganglia – a cluster of nerve cells responsible for receiving sensory information like taste, touch and smell. These cellular interactions are critical throughout embryonic and adult development to form new tissues and organs, with abnormalities resulting in animal and human diseases or defects such as certain cancers, cleft palate and heart conditions

“Essentially, we’re looking at the proteins – or the ‘glue’ – that keeps these two cell types together,” explains Taneyhill. “If we are able to figure out why and how these cells interact, it will give us insight into how other tissues are formed and could even lead to advances in therapies based on organ repair and regeneration.”

Employing deep sequencing technology, Taneyhill and her research team will use incubated chicken eggs to identify new genes that control cell movement and interactions in embryos at different stages of development.

Taneyhill, who was trained as a cancer biologist, says this project could serve as “an excellent model for cancer research, particularly how cancer cells become invasive” because cancer cells can act similarly to those she will be studying inside the chick embryos. The grant from the NIH will fund five years of research on this subject.